Information about The Honorable Paul Webber 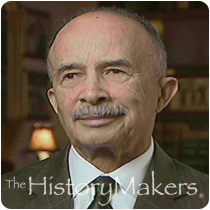 See how The Honorable Paul Webber is related to other HistoryMakers

Webber practiced law in Columbia, South Carolina for nineteen months and taught at Allen University. He was married in 1958 before leaving for UCLA where he was employed as assistant law librarian in 1959. In 1960, he joined Golden State Mutual Insurance Company as associate legal counsel. Webber was appointed trial attorney for the Antitrust Division of the United States Justice Department in 1964. In 1967, he becomes managing attorney for the Neighborhood Legal Services Program, serving during the 1968 riots. Webber became a partner with Thompson Evans Dolphin and Webber in 1969, which later became Dolphin Branton Stafford and Webber. In Washington, Webber taught at Howard University School of Communications and later at George Washington University School of Law. Webber was appointed Washington, D.C. Superior Court Judge in 1977. In 1985, he was named “Outstanding Trial Judge of the Year” and was rated “One of the Best Trial Justices in the Washington Metropolitan Area” by Washington Magazine in 1996. Webber ascended to Senior Judge of the D.C. Superior Court in 1998 and was inducted into the National Bar Association Hall of Fame that same year.

Webber is a member of the Joint Center for Political and Economic Studies Think Tank, the Council for Court Excellence, and the Guardsmen. He serves as board member and general counsel for the Boule, Sigma Pi Phi and is also the author of Enjoy the Journey, One Lawyer’s Memoir.

Webber is married to Fay DeShields Webber and has three grown children.

Webber was interviewed by The HistoryMakers on February 6, 2007.

See how The Honorable Paul Webber is related to other HistoryMakers
Click Here To Explore The Archive Today!