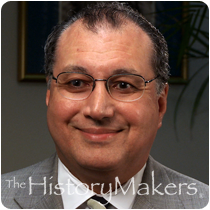 See how The Honorable Paul R. Valteau, Jr. is related to other HistoryMakers
Donate Now

Former Civil Sheriff of Orleans Parish Paul Raymond Valteau, Jr., was born on October 5, 1946, in New Orleans, Louisiana. His father, Paul Valteau Sr. (1918-2003), was a mailman, and his mother, Udine Davis Valteau (1921-1996), was a schoolteacher. His father’s parents died when Valteau Sr. was very young, but his mother’s parents, Nelly Norman Davis, a housekeeper, and William H. Davis, a bricklayer, lived until 1974 and 1962, respectively. Valteau had two younger siblings, Eileen and Edward, and from 1960 to 1965 he attended St. Augustine High School, an all-boys parochial high school in New Orleans.

In 1969, Valteau obtained his B.A. degree from Dillard University in Sociology, and in 1972, he received his J.D. degree from Loyola University New Orleans School of Law. From 1974 to 1976, Valteau served as a lawyer for the Louisiana legislature, then went on to work as a private practice lawyer with the firm Gerty, Ferry, & Valteau. In 1979, Valteau’s elder daughter, Michelle, was born, and in 1982, she was followed by her younger sister, Collette. That same year, Valteau was elected to Civil Sheriff of Orleans Parish, a position he would keep for twenty-eight years. In 2007, he married Paula T. Saizan in Houston, Texas.

From 2006 to 2009, Valteau served as Chairman of the R L Carriers New Orleans Bowl Committee. At a New Orleans City Council regular meeting on February 19, 2009, the council honored Valteau for his efforts on the Executive Committee of the Greater New Orleans Sports Foundation (GNOSF), commending him for his leadership and its role in the event’s growth. In 2010, Sheriff Marlin Gusman was elected as the first single sheriff of Orleans Parish since 1880; until then, Orleans Parish had separate civil and criminal sheriffs. Valteau, the civil sheriff, did not run against Gusman and instead retired from politics. He now heads the private law firm Valteau, Harris, Koenig, & Mayer.

See how The Honorable Paul R. Valteau, Jr. is related to other HistoryMakers
Donate Now
Click Here To Explore The Archive Today!