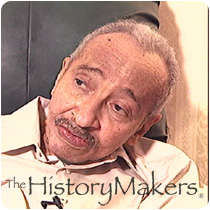 See how The Honorable Parren J. Mitchell, III is related to other HistoryMakers

Parren James Mitchell was born in Baltimore, Maryland, on April 29, 1922, to Clarence M. Mitchell and Elsie Davis Mitchell. Though their street address was an alley, Mitchell, his brother Clarence, Jr., and sisters Elsie and Anna Mae were all strivers. Mitchell attended Garnet Elementary School, Booker T. Washington Junior High School, and graduated from Frederick Douglass High School in 1940. Mitchell joined the United States Army and served as a commissioned officer of the 92nd Infantry Division during World War II, receiving the Purple Heart. He graduated from Morgan State University with honors in 1950, but segregation barred Mitchell from attending the University of Maryland Graduate School. With advice from his brother (who was an official of the NAACP) and his brother's mother in law (Lilly Mae Carroll Jackson, the state NAACP director) and with Thurgood Marshall as counsel, Mitchell successfully sued the University of Maryland for admittance to graduate school; he received his M.A. degree in sociology from the University of Maryland in 1952, and returned to teach at Morgan State.

Mitchell served as a supervisor of probation work for the Supreme Bench of Baltimore City from 1954 to 1957; executive director of the Maryland Human Relations Commission from 1963 to 1965; executive director of the Baltimore Community Action Agency from 1965 to 1968; and president of the Baltimore Neighborhoods, Inc. from 1969 through 1970. He was a pivotal player in the passage of Maryland’s Public Accommodations Law of 1963. A constituency Mitchell helped organize backed his nephew, Clarence Mitchell, III’s, successful run for the state legislature in 1963, and in 1970, backed by the same political organization, Mitchell was elected to the 92nd United States Congress, representing Maryland’s 7th District.

Reelected to seven consecutive Congresses through 1987, Mitchell served as a member of the Committee on Banking; Finance and Urban Affairs; the chair of the Subcommittee on Access to Capital and Business Opportunities; the Joint Economic Committee; was chair of the Subcommittee on Minority Economic Development and Housing; and was House at Large Whip. As one of the thirteen founders of the Congressional Black Caucus in 1971, Mitchell was part of a 20th century resurgence of black political strength. In 1976, Mitchell attached to President Jimmy Carter’s $4 billion Public Works Bill an amendment that compelled state, county, and municipal governments seeking federal grants to set aside ten percent of the money for minority contractors and subcontractors; his amendment to the 1982 Surface Transportation Assistance Act also required ten percent set aside for minorities.

In 1980, Mitchell founded the Minority Business Enterprise Legal Defense and Education Fund, Inc. (MBELDEF) and served as its chairman of the board.

See how The Honorable Parren J. Mitchell, III is related to other HistoryMakers
Click Here To Explore The Archive Today!