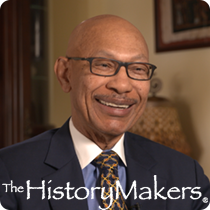 "Plan your work, work your plan. Power concedes nothing without a demand..."

Political official and civic leader Otis Johnson was born on March 26, 1942 in Savannah, Georgia to Lillian Spencer and Otis S. Johnson, Sr. Johnson attended Paulsen Street Elementary School and Cuyler Street Junior High School in Savannah. He graduated from Alfred E. Beach High School in 1960. Johnson earned his A.A. degree in liberal arts from Armstrong State University in 1964, becoming the university’s first African American graduate. He earned his B.A. degree in history from the University of Georgia in 1967, and his M.S.W. degree in social work from Clark Atlanta University in 1969. Johnson received his Ph.D. degree in social welfare from Brandeis University in 1980.

Johnson served in the U.S. Navy Reserve from 1959 to 1965. Johnson worked for the Economic Opportunity Authority for Savannah-Chatham County Area, Inc. and the City of Savannah Model Cities Program before joining the faculty at Savannah State University in 1971. He was responsible for establishing the undergraduate program in social work at the university. Johnson served as the Alderman of District Two on the Savannah City Council from 1983 to 1988. He resigned in 1988 to become the executive director of the Chatham Savannah Youth Futures Authority. In 1998, he returned to Savannah State University as the dean of the College of Liberal Arts and Social Sciences. In the next year, Johnson joined the Savannah-Chatham County Board of Education, serving for four years. He was elected as mayor of Savannah in 2003, becoming the second African American to assume the role. After leaving the mayor’s office in 2012, Johnson became a scholar in residence and professor emeritus at Savannah State University. His autobiography, From ‘N Word’ to Mr. Mayor: Experiencing the American Dream, was published in 2016.

In 2001 and 2006, Johnson was featured in Georgia Trend magazine’s list of “Most Influential Georgians.” He was the recipient of Armstrong State University’s Distinguished Alumnus Award in 2005 as well as the Notable Alumnus Award in 2010.

Johnson served as chair of the board of trustees of the Mary Reynolds Babcock Foundation and MDC, Inc. He was also a member of the Aspen Institute’s Roundtable on Comprehensive Community Initiatives.

Johnson has one daughter, Alexis Williamson.

Otis Johnson was interviewed by The HistoryMakers on February 8, 2017.