Information about The Honorable Norman Rice 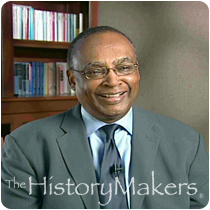 Norman Blann Rice, born on May 4, 1943 in Denver, Colorado, was the 49th mayor of Seattle, Washington. Rice was Seattle’s first and only African American mayor. Rice is the youngest son of Irene Hazel Johnson (1913-1993) and Otha Patrick Rice (1916-1993). Rice’s father worked as a porter on the railroads and for the United States Postal Service. He was also the owner and operator of Rice’s Tap Room and Oven in Denver. Rice’s mother was a caterer and a bank clerk. Rice’s parents divorced when he was a teenager. His grandmother, Reverend Susie Whitman (1895-1989), Assistant Pastor at Seattle’s First A.M.E. Church, was one of the first western women ministers in the African Methodist Episcopal Church. After graduating from Denver’s Manual High School in 1961, Rice attended the University of Colorado at Boulder. Distressed by the segregated housing and meal facilities and frustrated by the work load, he dropped out in his second year and went to work. Between 1963 and 1969, Rice held jobs as a hospital orderly, a meter reader and an engineer’s assistant. Rice arrived in Seattle in 1969 and restarted his education at Highline Community College and received his A.A. degree in 1970. Then, he attended the University of Washington through the Economic Opportunity Program (EOP). By 1972, Rice had earned his B.A. degree in communications and in 1974 his M.A. degree in public administration at the University of Washington.

Before entering city government, Rice worked as a reporter at KOMO-TV News and KIXI Radio, served as Assistant Director of the Seattle Urban League, was Executive Assistant and Director of Government Services for the Puget Sound Council of Governments and was employed as the Manager of Corporate Contributions and Social Policy at Rainier National Bank. Rice was first elected to the Seattle City Council in 1978 and reelected in 1979, 1983 and 1987, serving eleven years in all. Rice served as Mayor of Seattle from 1990 to 1997. Because of his warm personality and easy smile, he was affectionately known as “Mayor Nice.” From 1995 to 1996, Mayor Rice served as president of the U.S. Conference of Mayors, an association of more than a thousand of America’s largest cities.

After nineteen years of public service in Seattle city government, Rice served as president of the Federal Home Loan Bank of Seattle from 1998 to 2004. Rice was also Vice Chairman of Capital Access, LLC. Rice returned to academia in 2007 as a visiting professor at the Evans School of Public Affairs at the University of Washington, where he is to lead a series of public seminars on Civic Engagement for the 21st Century.

Rice married Constance Williams on February 15, 1973. They have one adult son, Mian Rice, and one grandchild, Sekoy Elliott Rice.

Rice was interviewed by The HistoryMakers on October 24, 2007.

See how The Honorable Norman Rice is related to other HistoryMakers
Donate Now
Click Here To Explore The Archive Today!