Information about The Honorable Myron Thompson 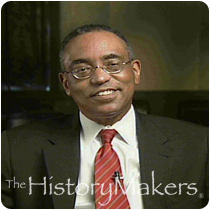 See how The Honorable Myron Thompson is related to other HistoryMakers

Federal District Court Judge Myron Herbert Thompson was born on January 7, 1947 in Tuskegee, Alabama to Lawrence and Lillian Thompson. At age two, Thompson contracted polio and spent much of his time alone, finding solace in jazz and classical music. He attended Tuskegee Institute High School where he was named class salutatorian in 1965. Thompson received his B.A. degree in political science from Yale University in 1969 and his J.D. degree from Yale Law School in 1972.

President Jimmy Carter nominated Thompson to the bench of the United States District Court, Middle District of Alabama. He was confirmed by the U.S. Senate and received his appointment in September of 1980. At age thirty-three, he was the youngest member of the bench. Thompson served as Chief Justice from 1991 to 1998.

Thompson presides over the same court room where many landmark civil rights cases were argued and decided. He had the court restored to stand as a testament to history. Thompson also made national headlines when he ordered Alabama Supreme Court Justice Roy Moore to remove a monument of the Ten Commandments from the rotunda of the State of Alabama’s courthouse. He remains as much of an active legal scholar as his position permits, often calling for the executive and legislative branches to accept more responsibility for constitutional oversight that too often is left as the responsibility of judges. Thompson has served on the bench for twenty-seven years.

Myron Thompson was interviewed by The HistoryMakers on March 20, 2007.

See how The Honorable Myron Thompson is related to other HistoryMakers
Click Here To Explore The Archive Today!