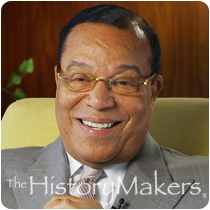 Favorite Time of Year:
Spring
Favorite Quote:
Up You Mighty Nation, You Can Accomplish What You Will!

Favorite Time of Year:
Spring
Favorite Quote:
Up You Mighty Nation, You Can Accomplish What You Will!

Minister Louis Farrakhan was born on May 11, 1933 in the Bronx, New York to Sarah May and Percival Clarke. He was born Louis Eugene Walcott, but would later adopt the surname of Farrakhan after his conversion to Islam. Louis and his brother, Alvan Walcott, were raised by their mother and step-father in Boston, Massachusetts. As a youth, Farrakhan was a talented violinist and athlete. He graduated from Boston English High School and attended Winston-Salem Teacher’s College, during which time he recorded calypso albums under the name “The Charmer.” In 1953, Farrakhan married his wife, Khadijah Farrakhan (born Betsy Ross), and he dropped out of college during his senior year to assist her during her pregnancy.

After attending the annual Saviors’ Day address delivered by Elijah Muhammad, Leader of the Nation of Islam (NOI), Farrakhan decided to join the NOI in 1955. Farrakhan became minister of Muhammad’s Temple No. 11 in Boston, Massachusetts in 1956. Nine years later, he was appointed by Elijah Muhammad to serve as Minister of Muhammad’s Temple No. 7 in New York City. Farrakhan worked with the Harlem community to improve the quality of life in the neighborhood, but the decisions made by Imam W. Deen Mohammed to make the NOI resemble Sunni Islam prompted Farrakhan to gather his own supporters and rebuild the NOI based on the leading principles of Wallace Fard Muhammad and Elijah Muhammad. Farrakhan first assumed the role of Leader of the NOI in 1978.

Although at times a controversial figure, Farrakhan’s message of a unified community and the importance of reversing negative stereotypes has been the guiding principle of many of his actions. To combat the negative image of African American men often presented by the media, Farrakhan organized the Million Man March in Washington, D.C. on October 16, 1995 and the Millions More Movement ten years later. Farrakhan was voted the Person of the Year by Black Entertainment Television in 2005, and the following year, he was voted the fifth most important African American leader in the AP-AOL “Black Voices” poll.

Louis Farrakhan was interviewed by The HistoryMakers on November 29, 2010.

See how The Honorable Minister Louis Farrakhan is related to other HistoryMakers
Donate Now
Click Here To Explore The Archive Today!