Information about The Honorable Michael Nutter 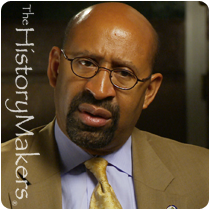 See how The Honorable Michael Nutter is related to other HistoryMakers

Mayor Michael Nutter was born on June 29, 1957, in Philadelphia, Pennsylvania to Mr. and Mrs. Basil Nutter. Nutter and his sister grew up in a row house on Larchwood Avenue in West Philadelphia, where he attended a mostly white Jesuit high school, St. Joseph’s Preparatory School. Nutter received an academic scholarship to St. Joseph’s Preparatory High School where he graduated from in 1975. Nutter then attended the Wharton School of the University of Pennsylvania, where he earned his B.A. degree in business administration in 1979.

After graduating from the University of Pennsylvania, Nutter worked at the minority-owned investment firm of Pryor, Counts & Co., Inc. He began his political career in 1983 working for Philadelphia Councilman John Anderson until Anderson passed away in 1984. Nutter then joined Angel Ortiz’s campaign for Philadelphia City Council. He was then elected to serve as the Democratic committee nominee for Philadelphia’s 52nd ward in 1986 and in 1991, Nutter was elected Fourth District Councilman, unseating longtime Councilwoman Ann Land. During his fifteen year tenure as fourth district councilman, Nutter created an independent ethics board, restored library funding, and passed the Clean Indoor Air Worker Protection Law. Nutter has served as Chairman of the Pennsylvania Convention Center Authority Board since 2003.

Nutter left the Philadelphia City Council in 2006 to run for Mayor of Philadelphia. In 2007, Nutter defeated Al Taubenberger by a record 4 - 1 margin to become the third African American Mayor for the country’s fifth largest city. During his first term, Nutter established economic development initiatives that attracted a major clothing retailer and pharmaceutical company to Philadelphia, bringing jobs and millions of dollars in revenue. He also helped to spur housing and business development in the city’s much maligned North Philadelphia neighborhood. Additionally, the core issues of his platform are matters such as crime reduction, environmental sustainability, zoning and planning and ethics reforms. Nutter was re-elected to a second term in 2011 and sworn into office January 2, 2012. Nutter lives in the Wynnefield neighborhood in West Philadelphia with his wife and daughter. His son, Christian, lives and works in New Jersey.


Michael Nutter was interviewed byThe HistoryMakers on May 24, 2012.

See how The Honorable Michael Nutter is related to other HistoryMakers
Click Here To Explore The Archive Today!