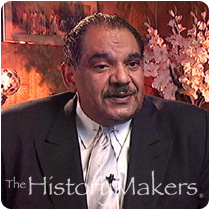 See how The Honorable Michael Mitchell, Sr. is related to other HistoryMakers

Member of the prominent Baltimore family of the same name, Michael Bowen Mitchell was born in Baltimore, Maryland, on November 7, 1945. His father, Clarence Mitchell, Jr., was a reporter for the Baltimore Afro-American and was director of the Washington, D.C., bureau of the NAACP for almost thirty years. His mother, Juanita Jackson, was a prominent attorney and civil rights activist. Mitchell graduated from the Baltimore City College High School in 1963. He then enrolled at Lincoln University, where he earned his B.A. degree in 1967. Mitchell went on to attend the University of Maryland School of Law, earning his J.D. degree in 1970.

With his family prominent in the Civil Rights Movement, Mitchell became involved at a young age in the movement himself, often joining his parents and family members in organizing demonstrations. By 1975, at the age of twenty-nine, Mitchell was serving on the Baltimore City Council, and in the 1980s, he was elected to the Maryland State Senate. Since then, he has been involved in a number of businesses. At the time of the interview, he was in charge of the Lillie Mae Carroll Jackson Museum. Jackson is Mitchell’s maternal grandmother and was an early fighter for civil rights. She was an influential counselor to Thurgood Marshall, and she was crucial in instigating “Buy Where You Can Work” campaigns in the greater Baltimore area, which then caught on nationwide. The museum stores the photos and papers of many members of the Mitchell family, including those of his parents.

Mitchell was interviewed by The HistoryMakers on June 9, 2004.

See how The Honorable Michael Mitchell, Sr. is related to other HistoryMakers
Click Here To Explore The Archive Today!