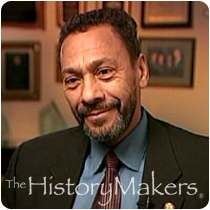 See how The Honorable Melvin L. Watt is related to other HistoryMakers

The second son of Evelyn Harris and the second African American elected to Congress from North Carolina, Melvin Watt has lived the life of a frontrunner. Born to a single teenaged mother in rural North Carolina in 1945, Watt's childhood home lacked electricity and indoor plumbing. Watt's fervent work ethic was demonstrated in his youth when he drove a school bus before and after school in order to contribute to the financial support of his family. His mother's encouragement to read and excel in school prepared Watt to graduate Phi Beta Kappa from the University of North Carolina in 1963 and to subsequently earn a scholarship to Yale University Law School.

After graduation, Watt returned to Charlotte, entering the law firm of Chambers, Stein, Ferguson and Becton. Watt worked as a civil rights attorney for twenty-two years, during which time he served one term in the North Carolina State Senate from 1985 to 1986. Declining to run for a second term or any other elective office until his two sons graduated from high school, Watt chose to work behind the scenes politically. He managed Harvey Gantt's campaigns for City Council, mayor of Charlotte and U.S. Senate. In 1992, with the formation of North Carolina's 12th District that included his hometown, Watt opted to run for Congress, with his eldest son, Brian, as his campaign manager.

As a member of the U.S. House of Representatives, Watt served on the Financial Services Committee and Judiciary Committee and is the ranking member of the Subcommittee on Commercial and Administrative Law. He is one of two black members elected to Congress in this century. Watt is known as a progressive Democrat and fearless defender of civil liberties. He has been repeatedly reelected to Congress, where he has developed and supported legislation affecting African American and Latino citizens in the areas of housing, welfare, reparations and education.

Watt also loves sports. He has been the State Democratic Baseball Team's star pitcher and also plays tennis. He is a lifetime member of the NAACP, was president of the Mecklenburg County Bar Association and still attends his childhood church, Mt. Olive Presbyterian Church, on Sundays. Watt and his wife, Eulada, have two sons, Brian and Jason, who are both graduates of their father's alma mater, Yale University.

See how The Honorable Melvin L. Watt is related to other HistoryMakers
Click Here To Explore The Archive Today!