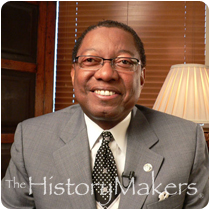 "One Baton Rouge is better."

Mayor Melvin L. “Kip” Holden was born on August 12, 1952, in New Orleans, Louisiana to Rosa May Rogers and Curtis Holden. In 1970, he graduated from Scotlandville Senior High School in Baton Rouge, Louisiana and went on to graduate with his B.A. degree in journalism from Louisiana State University Manship School of Mass Communications in 1974. Afterwards, he decided to pursue a career in radio broadcasting and was hired as news director for WXOK Radio in Baton Rouge. He later relocated to New Orleans where he served as a reporter for WWL Radio. He then began a career in television broadcasting by becoming a reporter for WBRZ Channel 2 in Baton Rouge in 1978. During that time, Holden furthered his education by earning his M.A. degree in journalism from Southern University in Baton Rouge, Louisiana in 1982.

Holden worked as a relations specialist for the United States Census Bureau; a Public Information Officer for the Baton Rouge City Police Department; and a Law Clerk for the Louisiana Department of Labor Office of Workers’ Compensation. In 1984, he was elected as District “2” Councilman of the Baton Rouge Metro Council, beginning his successful career in Louisiana politics. Then in 1985, he graduated with his J.D. degree from Southern University Law Center.

In 1988, Holden was elected as a state representative for the Louisiana House of Representatives. Later, in 1991, he became an adjunct professor of Law at his alma mater, the Southern University Law Center. He went on to graduate from the National Institute of Trial Advocacy in 1998, and in 2001, he was elected to complete the remaining term for Sen. W. Fields. Melvin recognized as an effective and remarkable leader, in 2002, Holden was invited to study at the Oxford University Round Table in England to discuss issues that affect the public good in all its various forms and ramifications.

Holden was a leading figure in the aftermath of Hurricane Katrina. He led efforts to aid many evacuees that sought refuge in Baton Rouge. He addressed the United States Senate in his own efforts to seek additional federal funding to combat the destruction of Hurricane Katrina. Holden has received numerous awards including: the Louisiana Chapter Distinguished Leadership Award from the American Planning Association; the Military Order of the Purple Heart Distinguished Service Award and the National Conference of Black Mayors Valiant Award for Balanced Government.

Melvin L. “Kip” Holden was interviewed by The HistoryMakers on March 26, 2008.