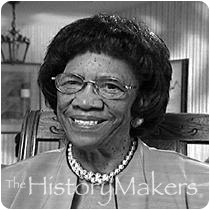 See how The Honorable Mary T. Christian is related to other HistoryMakers

Educator and politician Mary Taylor Christian was born on August 9, 1924 in Hampton, Virginia. Her mother was a homemaker and her father was a businessman. In 1941 she earned her high school diploma from Phenix High School in Hampton where she was a member of the National Honor Society, basketball, drama and debate teams. After graduation she married her high school sweetheart and by the time she was 19 she was a divorced mother of two.

While working in the laundry at Hampton University she began taking typing courses and eventually landed a secretarial job at the University. She was encouraged by her mentor to further her studies and earned her Bachelor of Science degree in education in 1955. From 1955 until 1960 she worked as a teacher at Hampton city schools. During the summers she attended Columbia University, where she earned her Masters degree in Speech and Drama in 1960. In 1968 she earned her PhD from Michigan State University while working as a professor at Hampton University. In 1968 Christian helped organize a voter registration drive at Hampton which resulted in more than a thousand people registering to vote.

In 1980 she was named the Dean of Hampton's school of education. Christian was the first African American to serve on the Hampton City School Board. She worked as a campaign manager for four political candidates and in 1985 decided to take the plunge into politics herself. In 1986 she was elected to the Virginia House of Delegates and became the first African American since reconstruction to represent the state's 92nd district, the city of Hampton.

Christian served seven terms in the Virginia General Assembly where she championed legislation on education, healthcare and prescription drugs. Christian was among three African Americans appointed to the powerful House Appropriations Committee. She also served on the Education and Rules Committees.

Christian, affectionately known by her thousands of students as "Dr. C" is professor emeritus at Hampton University. She is the recipient of numerous awards for her community and humanitarian service.

See how The Honorable Mary T. Christian is related to other HistoryMakers
Click Here To Explore The Archive Today!