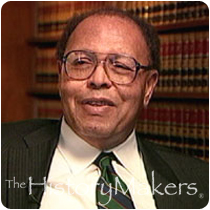 See how The Honorable Marcus O. Tucker is related to other HistoryMakers
Donate Now

Los Angeles County Superior Court Judge Marcus O. Tucker, Jr. was born in Santa Monica, California, on November 12, 1934. His father was a physician who migrated from Kansas and his mother a teacher and realtor from Georgia.

Tucker graduated from University High School in Los Angeles in 1952. He briefly attended Fisk University but soon transferred to the University of Southern California. There, Tucker was an honor student and majored in international studies. When he earned his B.A. in 1956 his plan was to attend Law School. His uncle, Chicago lawyer James McClendon, was a role model who became an Illinois state senator. Tucker attended Howard University Law School and served on the editorial staff of the Howard Law School Journal from 1959 to 1960. He matriculated with a distinguished class that also included Vernon Jordan. Tucker earned a J.D. in 1960 and in 1997 earned an MA. in Criminal Justice from Chapman University.

Returning to Santa Monica, Tucker served as the first Santa Monica African American deputy city attorney in the criminal division from 1963 to 1965. He was an assistant U.S. attorney in the Los Angeles Criminal Division from 1965 to 1967. Tucker was the first African American to serve as presiding judge of the Long Beach Municipal Court in 1977 and was a supervising or presiding judge in Los Angeles-area juvenile courts from 1987 to 1994. In 1985, he became judge of the Los Angeles County Superior Court. As presiding judge of the Los Angeles Juvenile Courts, Tucker was in charge of the largest system in the United States. Tucker innovated low-cost drug testing for parents under the court's jurisdiction, referrals for community resources and a new system for tort lawyers. Tucker initiated Teen Courts with peer juries and closely monitored truancy rates. He also established a playground facility for children awaiting court action.

As a member of the John Mercer Langston Bar Association, Tucker initiated the History of Black Lawyers in Los Angeles project. Among his many honors and affiliations, Tucker was named to the National Bar Association Hall of Fame in 2002.

Tucker was interviewed by The HistoryMakers in 2002.

See how The Honorable Marcus O. Tucker is related to other HistoryMakers
Donate Now
Click Here To Explore The Archive Today!