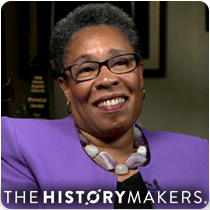 Political leader Marcia L. Fudge was born on October 29, 1952 in Cleveland, Ohio to Marian Saffold. She graduated from Shaker Heights High School in 1971, and went on to obtain her B.S. degree in business administration from The Ohio State University in Columbus in 1975. Fudge later received her J.D. degree from Cleveland State University’s Cleveland-Marshall College of Law in 1980.

After completing her J.D. degree, Fudge worked as a law clerk and then as director of the personal property tax department in Cuyahoga County, Ohio. Later, she served as the deputy county auditor for the county’s estate tax department and the director of the Cuyahoga County Budget Commission. In 1988, Fudge worked as the director of budget and finance for the Cuyahoga County prosecutor’s office. Then, in 1999, she entered politics as the chief of staff for U.S. Congresswoman Stephanie Tubbs Jones, where she worked for a year before running and winning the race for mayor of Warrensville Heights, Ohio. Following the untimely death of Jones in 2008, Fudge became the U.S. Representative for the 11th District of Ohio. She won re-election for her seat in the subsequent elections of 2010 and 2012. In 2013, Fudge became chair of the Congressional Black Caucus for the 113th Congress and founded the Rock and Roll Caucus. In 2016, she was selected to fill the position as chair of the Democratic National Convention after the resignation of Debbie Wasserman Schultz.

Fudge served on the board of Cleveland Public Library for over twenty years and was elected vice president in 1986. In 1988, she was elected as the national treasurer of Delta Sigma Theta Sorority, Inc. Four years later, Fudge became the first vice president of the sorority and completed her tenure as national president in 1996. She subsequently joined the boards of Alcoa Aluminum and Judge Lloyd O. Brown Scholarship Committee. In 2003, Fudge was named a hall of fame alumna at the eighteenth annual Shaker Heights Alumni Association hall of fame ceremony. Fudge was featured in Who’s Who in Black Cleveland in 2004 and 2005. The same year, she received the Trailblazer of the Year Award from the Norman S. Minor Bar Association. In 2007, Fudge received the Patricia Roberts Harris Medallion Award for excellence in government service and was named Municipal Leader of the Year by the Northeast Ohio Municipal Leader magazine.

Marcia L. Fudge was interviewed by The HistoryMakers on September 24, 2018.