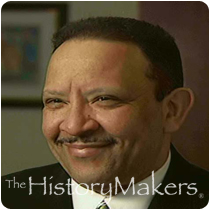 See how The Honorable Marc H. Morial is related to other HistoryMakers

Chief executive officer and politician Marc Haydel Morial was born on January 3, 1958, in New Orleans, Louisiana. He is the son of Sybil Haydel Morial, a teacher and university administrator, and the late Ernest N. “Dutch” Morial, who was the first African American Mayor of New Orleans. Morial attended a Jesuit high school, receiving his diploma in 1976. He earned his B.A. degree in economics and African American Studies at the University of Pennsylvania in 1980 and received his J.D. degree from Georgetown University Law Center in 1983.

In 1992, Morial served two years in the Louisiana State Senate, where he was recognized as Legislative Rookie of the Year. Prior to his elected service, Morial worked as a private practice lawyer at Adams and Reese, one of the Gulf South’s leading law firms. One of his most noteworthy U.S. Supreme Court cases - Chisom v. Roemer - established that the Voting Rights Act be applied to the election of judges. This led to the election of the first African American judge in Louisiana.

Morial served two terms as mayor of New Orleans from 1994 to 2002. Many improvements were made during his terms as mayor including crime reduction, police reform and the passing of a significant bond issue. In addition, during his last two years in office, Morial served as president of the United States Conference of Mayors. The Morials, father and son, have the distinction of being one of the first African American political dynasties.

In May 2003, Morial was appointed president and CEO of The National Urban League, a revered civil rights organization. Since that appointment, Morial’s Empowerment Agenda has worked to reenergize the League’s diverse constituencies; to build on the strength of its nearly one hundred year old legacy; and to increase its profile both locally and nationally.

Morial has been recognized by Non-Profit Times as one of America's top 50 non-profit executives, and was named one of the "100 Most Influential Blacks in America" by Ebony magazine. In June 2009, Morial was appointed chair of the 2010 Census Advisory Committee.

Morial is married to news anchor Michelle Miller and has two children.

See how The Honorable Marc H. Morial is related to other HistoryMakers
Click Here To Explore The Archive Today!