Information about The Honorable Lucille Whipper 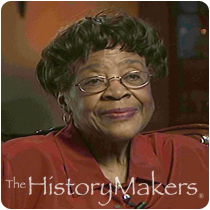 See how The Honorable Lucille Whipper is related to other HistoryMakers

Academic administrator and state government administrator Lucille Simmons Whipper was born on June 6, 1928 in Charleston, South Carolina, to Sarah and Joseph Simmons. In 1944, Whipper was a student activist at her high school, Avery Institute, in Charleston, South Carolina; her graduating class sought to desegregate the College of Charleston. While a student at Talladega College, where she received her B.A. degree in economics and sociology, Whipper became involved in a movement to integrate college student organizations throughout the state. Whipper continued her graduate education in political science at the University of Chicago where she received her M.A. degree. Whipper also later earned a certificate in guidance and counseling at South Carolina State University.

In the late 1960s, Whipper served as an organizer and director of Operation Catch-Up, a tutorial program for high school students; Operation Catch-Up was a forerunner of the Upward Bound programs. In 1972, Whipper was appointed to serve as Assistant to the President and Director of the Office of Human Relations at the College of Charleston. Whipper became the College’s first African American administrator and developed its first affirmative action plan. With the support of members of the Charleston County delegation and the President of College of Charleston, Theodore Stern, Whipper organized the Avery Institute of Afro-American History and Culture committee. The committee then founded the Avery Research Center for African American History and Culture in 1990.

Whipper served as vice chairman of the Democratic Party Convention in 1972 and was later elected to the Charleston District 20 School Board. In 1985, Whipper became the first African American female to serve as an elected state official from the Tri-County area. Whipper served for years on South Carolina Human Affairs Commission and sponsored two important pieces of legislation — one making marital rape a crime and the other requiring the monitoring of state agencies' hiring goals for minorities and females. In 2004, Whipper co-founded the Lowcountry Aid to Africa project, donating money to foundations and organizations helping people and families in Africa affected by AIDS.

Lucille Simmons Whipper was married to the late Rev. Dr. Benjamin J. Whipper, Sr., and lives in Mt. Pleasant, South Carolina. She is the mother of six children and is a grandparent.

Lucille Simmons Whipper was interviewed by The HistoryMakers on February 1, 2007.

See how The Honorable Lucille Whipper is related to other HistoryMakers
Click Here To Explore The Archive Today!