Information about The Honorable Louis Stokes 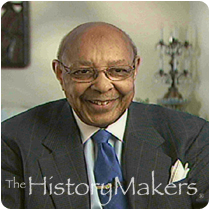 Politician, attorney and civil rights champion Louis Stokes was born on February 23, 1925 in Cleveland, Ohio. Raised by his mother, Stokes graduated from Central High School in 1943 where he was a member of the track team, the school newspaper, and the Latin club.

Soon after graduation, Stokes was inducted into the United States Army and he served in World War II. After his discharge in 1946, Stokes enrolled in Case-Western Reserve University and in 1953, Stokes earned his doctor of laws degree from Cleveland Marshall Law School.

Starting his law career as the in-house attorney for Carmack Realty Company, in 1955 Stokes established the law practice of Minor, Stokes and Stokes. During his fourteen year law career, Stokes participated in three cases before the United States Supreme Court including the landmark case of Terry v. Ohio, a search and seizure case which he argued and is taught in every law school. Elected to the United States Congress in 1968, Stokes became the first African American congressman from Ohio. He served fifteen consecutive terms in the U.S. House of Representatives.

A co-founder of the Congressional Black Caucus in 1969, Stokes served on a number of congressional committees including Appropriations, Intelligence and Ethics. In 1976, Stokes chaired the House Select Committee on Assassinations where he conducted hearings on the deaths of Martin Luther King, Jr. and President John F. Kennedy.

A recipient of many awards for his service to the community, Stokes retired from Congress in 1999 and worked as senior counsel at Squire, Sanders, and Dempsey and as a faculty member at Case-Western Reserve University. His brother, Carl, was the first black mayor of a major American city when he was elected mayor of Cleveland in 1967.

See how The Honorable Louis Stokes is related to other HistoryMakers
Donate Now
Click Here To Explore The Archive Today!