Information about The Honorable Lottie Watkins 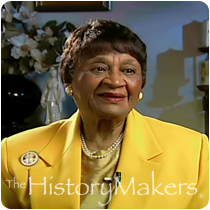 See how The Honorable Lottie Watkins is related to other HistoryMakers

Lottie Heywood Watkins is the retired CEO of Lottie Watkins Enterprises, Inc., a full-service real estate company specializing in property management. Watkins entered the real estate industry in the early 1960s and became the first African American female real estate broker in the Atlanta market. Watkins is known throughout the Atlanta business community as a shrewd businesswoman and is highly respected for the contributions she has made to civic and social affairs.

Watkins is the daughter of Susie Wilson and Eddie Heywood, a 1920s jazz pianist. Her brother, the second eldest of five children, gained critical fame with the Eddie Heywood, Jr. Trio throughout the 1940s as a songwriter, composer and pianist. Watkins was educated in the Atlanta Public School system and graduated from Booker T. Washington High School’s accelerated class in 1935. She graduated from Reid’s School of Business and became a secretary for Alexander—Calloway Realty Company. She worked as a teller/clerk at the Mutual Federal Savings and Loan Association until she started Lottie Watkins Enterprises, Inc.

Watkins became active with the voter’s rights campaign, the Civil Rights Movement and community–based organizations. In 1977, she was elected to the Georgia House of Representatives. She served as Co-Chair of the YMCA Membership Campaign, the American Cancer Society, and the NAACP Membership Drive and Freedom Fund Banquet. She was Chair of the Christmas Cheer Fund for the Atlanta Inquirer. Watkins has received numerous awards and citations; the Pioneer in Real Estate Award (Providence Missionary Baptist Church), Appeal of Human Rights Award (30th Anniversary Celebration of the Civil Rights Movement), Pioneer Award for Community Leadership (Empire Real Estate Board) and Outstanding Achievement in Real Estate and Business Award (Empire Real Estate Board 50th Anniversary). She was listed in Who’s Who of American Women, in Finance and Industry, Black World and International Who’s Who in Community Service and World Who’s Who of Women.

Watkins resided in her native Atlanta with her daughters and their families, Joyce and Judy, who actively operated Lottie Watkins Enterprises, Inc.

See how The Honorable Lottie Watkins is related to other HistoryMakers
Click Here To Explore The Archive Today!