Information about The Honorable Lillian Burke 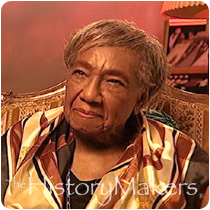 See how The Honorable Lillian Burke is related to other HistoryMakers

Attorney and retired judge Lillian Walker Burke was born in 1915, and grew up in Pittsburgh, Pennsylvania. After graduating from high school, Burke attended Ohio State University, where she received her bachelor's of science degree in education in 1947. In 1951, she received her law degree from the Cleveland Marshall College of Law, now part of Cleveland State University, and was admitted to the Ohio Bar.

While pursuing her law degree, Burke worked as a teacher in the Cleveland Public Schools. After graduating from law school, Burke served three years as the assistant attorney general, specializing in workmen's compensation. Burke was later appointed to the Ohio Industrial Commission by Governor James Rhodes, and served in that capacity for three years. Burke became the first African American woman to sit on the bench in the State of Ohio with her appointment to the Cleveland Municipal Court in January 1969; she was later elected to that office in November 1969, where she served until her retirement in 1987.

See how The Honorable Lillian Burke is related to other HistoryMakers
Click Here To Explore The Archive Today!