Information about The Honorable Leander Shaw 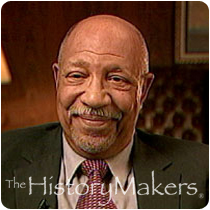 See how The Honorable Leander Shaw is related to other HistoryMakers

Florida Supreme Court Justice Leander Shaw, Jr. was born on September 6, 1930, in Salem, Virginia. His mother was a high school teacher and his father a high school principal, who later became the dean of Graduate Studies at Florida A&M University.
Shaw earned a B.A. from West Virginia State College in 1952. After graduating, Shaw entered the Army and served in the Korean conflict as an artillery officer. Motivated by the blatant racism he experienced in the military and inspired by the burgeoning Civil Rights Movement in the South, Shaw returned to school, and received his J.D. degree from Howard University's School of Law in 1957.

Shaw taught at Florida A&M University's Law School from 1957 to 1960 before entering private practice. While continuing private practice, Shaw also worked as both an assistant public defender and an assistant state's attorney in Jacksonville, Florida. His skill as a prosecutor was evident in his win/loss record: he prosecuted forty-two murder cases, only losing once. In 1979, Shaw was appointed to the bench, and presided over Florida's First District Court of Appeal. Just four years later, Shaw received an appointment as a Justice of the Supreme Court of Florida, where he served as the Chief Justice from 1990 to 1992. Shaw openly opposed Florida's continued use of the electric chair. In response to the 1999 execution of Allen Lee "Tiny" Davis, Shaw posted three-color photos taken after the event on his web site.

Shaw served on a number of advisory boards and was a member of various professional and community associations, including the American Bar Association, the National Center for State Courts, and Florida's Human Relations Council and Police Advisory Committee. Shaw's work extended into the international sphere as well. In September of 1991, he presented a paper at the Conference of Attorneys General of the African Nations held in Nigeria. He was granted honorary degrees from West Virginia State (LL.D.), Florida International University (Ph.D.), Nova University (LL.D), and Washington and Lee University (LL.D.) and was the recipient of such prestigious awards as the Florida Humanist of the Year (1991), and the Ben Franklin Award (1992).

Supreme Court Justice Leander Shaw, Jr. was interviewed by The HistoryMakers on April 19, 2002.

See how The Honorable Leander Shaw is related to other HistoryMakers
Click Here To Explore The Archive Today!