Information about The Honorable Larry Bullock 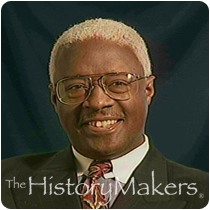 Senator and former state representative Rev. Larry S. Bullock was born on April 14, 1946 in Winston-Salem, North Carolina. Bullock was the first African American student to be admitted to Catawba College in Salisbury, North Carolina, where he graduated with his B.S. degree in political science. In 1969, he moved to Chicago, enrolled at Roosevelt University, and received his M.P.A. degree. After graduating from Roosevelt University in 1973, Bullock taught school in Evanston, Illinois. He also became active in Operation PUSH, finding a mentor in the Rev. Jesse Louis Jackson, Sr.

Bullock’s experience working with PUSH eventually led him into politics. He ran for Representative of Chicago’s 2nd Ward, but lost to incumbent William Barnett. Two years later, Bullock ran again and was defeated; however, Bullock prepared to run again and in 1978, he was elected to the Illinois House of Representatives. While in the state legislature, Bullock served on the Appropriations Committee as well as the Banking, Revenue and Labor committees. He sponsored legislation for the expansion of McCormick Place and chaired the House Governmental Operations Committee. He was also Chairman of the first Black Illinois Domestic Summit Conference.

Bullock served a total of four terms in the House. He ran for Congress in 1986 but lost to U.S. Congressman Charles B. Hayes.

Bullock later became an ordained minister at Ebenezer A.M.E. Church, and then founded and served as senior pastor of the Living Faith Cathedral Worship Church. He also worked as national manager of strategic relationships for Stewart Title Company and hosted two radio shows on WYLL-AM: “The Faith Factor: Jew and Christian In Dialogue” and “Real Estate Made Easy.” Bullock is also owner and president of April Cobra Enterprises, Inc., a construction management, general contracting and real estate development firm.

Bullock serves as president of the Roosevelt University Alumni Association and is a member of the Roosevelt University Board of Trustees. He is also founder and president of the U.S. Minority Contractors Association, and chairman of Heartland Energy Technology. His honors include the National Association of Real Estate Brokers’ Presidential Award and the 2006-2007 SuccessGuide Worldwide magazine “Top Achievers” award.

Bullock is married to Dr. Gloria E. Bullock. He has two children and five grandsons.

Larry S. Bullock was interviewed by The HistoryMakers on July 20, 2000.

See how The Honorable Larry Bullock is related to other HistoryMakers
Donate Now
Click Here To Explore The Archive Today!