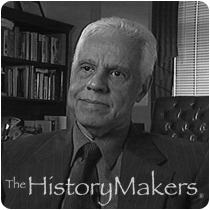 See how The Honorable L. Douglas Wilder is related to other HistoryMakers

Former governor of Virginia L. Douglas Wilder was born in Richmond, Virginia, on January 17, 1931. The second youngest of eight children, Wilder often spent time as a child at the local barbershop listening to political debates. After graduating from Armstrong High School at the age of sixteen, Wilder attended Virginia Union University, while he worked as a waiter to pay his way through college. Wilder earned his B.A. degree in chemistry from Virginia Union in 1951; the following year he was drafted into the army and sent to Korea. In Korea Wilder would lead a group of POW’s under his watch through artillery fire to rescue a group of wounded American soldiers, which earned him the Bronze Star.

Following his time in the Army, Wilder decided to become a lawyer, and in 1956, he entered Howard University. While at Howard University, Wilder met Henry Marsh, the future mayor of Richmond, and had the opportunity to watch Thurgood Marshall and a number of other notables hone their skills in moot court. Wilder also met Eunice Montgomery during his days as a student, and the two married on October 11, 1958. Wilder opened his law firm, which would become Wilder, Gregory & Associates, in 1961, and was soon asked by Spottswood Robinson, who had worked on the Brown v. Board of Education case, to take on some of his excess workload. While Wilder's legal career got off to a successful start, he refused to sit on the segregated side of courtrooms, and often argued with judges about the treatment of his clients. Over the next decade and a half, Wilder argued several famous cases, including his defense of William Penn, an infamous serial killer, which resulted in a hung jury. In 1969, Wilder successfully ran for the Virginia State Senate, becoming the first African American to hold a position there in almost one hundred years. In his first speech in the Senate, Wilder blasted the use of the racially offensive song, Carry Me Back to Old Virginny, and though his bill to repeal the anthem fell short, his reputation as an orator was secured.

During his time in the Senate, Wilder supported a number of bills that were beneficial to low-income residents, and was also a major proponent of anti-discrimination bills. Wilder was most active, however, in reforming legislation relating to juvenile criminal offenders. Beginning in the mid-1970s, Wilder also fought to secure a state holiday for Martin Luther King, Jr.’s, birthday, which finally succeeded in 1984. The following year, Wilder won an election to become the first black lieutenant governor in the United States in a landslide victory. After five years as lieutenant governor, Wilder was elected governor of Virginia, the first African American to become governor of a state in United States history. Coming into office in a budget crisis, Wilder was forced to make job and pay cuts, but in the end, Financial Magazine named Virginia the best-managed state in the country. Throughout his term in office, Wilder worked hard to support his low-income constituents and to promote equal opportunities for women and minorities.

See how The Honorable L. Douglas Wilder is related to other HistoryMakers
Click Here To Explore The Archive Today!