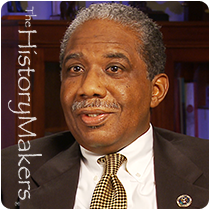 See how The Honorable Kenneth M. Hoyt is related to other HistoryMakers

Judge Kenneth Michael Hoyt was born on March 2, 1948 in San Augustine County, Texas. His father, Earl, was a barber; his mother, Fannie, a beautician. Hoyt attended Lincoln Elementary School and Lincoln High School, both in San Augustine, Texas. He received his A.B. degree from Texas Southern University in 1969 and his J.D. degree from Texas Southern University’s Thurgood Marshall School of Law in 1972, where he served as an editor for the Law Review.

From 1972 to 1981, Hoyt worked as an attorney at the Houston, Texas law firms of Wickliff, King, Hoyt & Jones; Anderson, Hodge, Hoyt & Jones; and Hoyt, Webster, Shepard & Anderson. While practicing law, Hoyt also fulfilled a six year military reserve commitment from 1972 to 1978. In addition, he served as city attorney for Kendleton, Texas and Prairie View, Texas from 1975 until 1981.

In 1981, Governor Bill Clements appointed Hoyt to preside over the 125th Civil District Court of Texas. He also practiced law through his firm, Kenneth M. Hoyt, P.C., from 1982 to 1985. During that time, Hoyt was a member of the faculty of the South Texas College Trial Advocacy Program, and from 1983 to 1984, he was an adjunct professor at the Thurgood Marshall School of Law. From 1985 to 1988, Hoyt served as a justice of the First Court of Appeals of Texas. Then, on November 24, 1987, Hoyt was nominated by President Ronald Reagan to a seat on the United States District Court for the Southern District of Texas. He was confirmed by the United States Senate in March of 1988, and received his commission on April 1, 1988. Hoyt was the second African American federal judge in the state of Texas. He took senior status on March 2, 2013.

Hoyt lives in Houston, Texas with his wife, Veola Johnson Hoyt. They have three children: Michael, an economist, Stacy, an educator, and Justin, a chemist.

Kenneth Hoyt was interviewed by The HistoryMakers on March 5, 2014.

See how The Honorable Kenneth M. Hoyt is related to other HistoryMakers