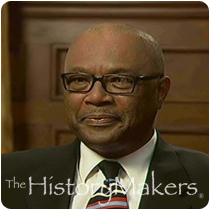 See how The Honorable Kenneth E. Reeves is related to other HistoryMakers

Mayor Kenneth Errol Reeves was born on February 8, 1951, in Detroit, Michigan. Reeves attended Detroit’s public schools and graduated from Cass Technical High School in 1968. After one year at Trinity College in Hartford, Connecticut, Reeves headed to Cambridge, Massachusetts, to attend Harvard University where he earned his degree in American history and literature in 1973. In 1976, Reeves graduated from the University of Michigan Law School.

As an attorney, Reeves served as the managing attorney for General Motors/United Auto Workers legal plan in Detroit. At the National Consumer Law Center in Boston, Reeves specialized in utility, insurance and banking regulations before running for a position on the Cambridge City Council. In 1989, Reeves was in private law practice in Cambridge.

Reeves became the first African American and the first openly gay person elected mayor of any city in Massachusetts. He is also the first openly gay African American mayor in U.S. history. Reeves served as the mayor of Cambridge, Massachusetts, from 1992 to 1995 (two terms) and was reelected to the mayoral seat for 2006 to 2008. Reeves was first elected to the council in 1990 and has served eight consecutive terms of two years each.

During his first four years as mayor, Reeves launched a number of initiatives that helped to transform the physical, educational, social, and cultural landscape of the City of Cambridge. As mayor and councilman, he focused on building consensus among varied interests, focusing his efforts on preserving affordable housing, fostering citizen empowerment, stimulating economic development and encouraging ethnic and gender diversity. As chairperson of the Cambridge School Committee, he launched the Task Force on the Potential of Students and the Commission on the High School of the 21st Century.

Reeves established the city’s first Office of Tourism and a commission to give voice and platform to the new immigrants in Cambridge. He led new educational and youth development efforts and fostered historical and cultural programs and activities.

See how The Honorable Kenneth E. Reeves is related to other HistoryMakers
Click Here To Explore The Archive Today!