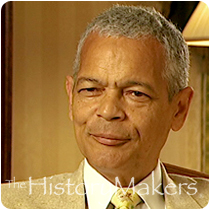 Civil rights activist, state representative, and state senator Julian Bond was born on January 14, 1940 in Nashville, Tennessee. He and his family moved to Pennsylvania, where his father, Horace Mann Bond, was appointed president of Lincoln University.

In 1957, Julian Bond graduated from the George School, a Quaker school in Bucks County, Pennsylvania, and entered Morehouse College. In 1960, Julian Bond was one of several hundred students who helped form the Student Nonviolent Coordinating Committee (SNCC). In 1965, Julian Bond was elected to the Georgia House of Representatives. He was barred from taking his seat in the House because of his outspoken statements against the Vietnam War. In December 1966 the Supreme Court ruled in his favor and he served four terms as Representative and six terms in the Georgia Senate, from 1975-1986. During the 1968 presidential election, he was the first African American to be nominated for Vice-President of the United States. He withdrew his name from the ballot, however, because he was too young to serve. Later, Julian Bond was host of America's Black Forum. In 1987, Bond narrated the critically acclaimed 1987 PBS series, Eyes on the Prize.

Julian Bond continued his tradition of activism as Chairman of the NAACP. He also served as President Emeritus of the Southern Poverty Law Center. Julian Bond was a Distinguished Scholar in Residence at American University in Washington, D.C., and a faculty member in the history department at the University of Virginia.