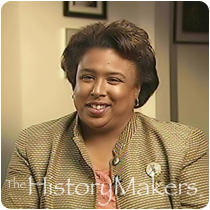 See how The Honorable Judith C. Rice is related to other HistoryMakers
Donate Now

Former City Treasurer for the City of Chicago, Judith Carol Rice was born on July 30, 1957, in Chicago, Illinois. The granddaughter of sharecroppers and daughter of Thelma Dean Martin and Fred Rice, Chicago’s first African American Police Superintendent, Rice attended Avalon Park Elementary School and Mercy High School. While attending high school, Rice was a member of the drama club and performed in the lead role for her high school’s production of Hello Dolly. Rice graduated from high school in 1975, and attended Northern Illinois University from 1975 to 1976. In 1977, Rice began attending Loyola University and graduated cum laude with her B.A. degree in communications in 1981.

In 1982, Rice was hired to work in the Cook County State’s Attorney’s Office. Rice rose from a Victim/Witness Assistant to Assistant to the Illinois State’s Attorney. While working in the Illinois State’s Attorney’s Office, in 1984, Rice decided to further her education by attending John Marshall Law School. In 1988, Rice earned her J.D. degree and was admitted to the Illinois Bar. In 1989, Rice began her career with the City of Chicago serving as Assistant Corporation Counsel. Rice went on to become the city’s managing Deputy Director and then Director of the Department of Revenue from 1993 to 1995. It was in these positions that Rice was instrumental in the complete overhaul of Chicago’s parking ticket collection system. Also in1995, Rice worked as a staff member for Chicago Mayor Richard M. Daley.

Between 1996 and 2000, Rice became the first woman commissioner of two of the biggest infrastructure agencies in City of Chicago government; from 1996 to 1999, she served as Commissioner of the Chicago Department of Water, and from 1999 to 2000, she served as head of the Chicago Department of Transportation. In November of 2000, Rice was appointed by Chicago Mayor Richard M. Daley as City Treasurer. As City Treasurer, Rice was responsible for all cash and investments for the City of Chicago.

See how The Honorable Judith C. Rice is related to other HistoryMakers
Donate Now
Click Here To Explore The Archive Today!