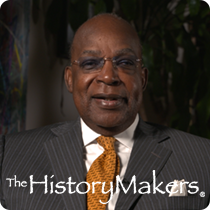 See how The Honorable John W. Peavy, Jr. is related to other HistoryMakers
Donate Now

Judge John W. Peavy, Jr. was born on April 28, 1942 in Houston, Texas to Malinda Terrell Peavy and John W. Peavy, Sr. Peavy graduated from Phyllis Wheatley High School in 1960, where he began his lifelong engagement in local politics as a member of the Young Democrats of Harris County. He then enrolled at Howard University in Washington, D.C., where he earned his B.A. degree in business administration with an emphasis in accountancy in 1964. Peavy worked for Vice President Lyndon B. Johnson’s office as an undergraduate student, and later as a White House staffer during Johnson’s presidency. In 1967, Peavy received his J.D. degree from the Howard University School of Law.

Upon graduating from law school, Peavy returned to Houston, and opened a private law practice focused on criminal and civil cases. In 1967, he joined the Harris County Community Action Association as an associate senior coordinator; and, in 1969, he became an executive assistant to Harris County Judge William Elliot. He then worked as an expert for the American Bar Association’s Project Home, where he handled real estate cases for the NAACP. Funded by the Ford Foundation, the program provided legal and technical assistance to federal housing programs. Peavy also served on the Houston City Council. In 1973, Judge William Elliott appointed Peavy as justice of the peace for a newly formed, majority-black district in Harris County. He was later elected for a full term in 1974, serving until 1977 when he was appointed by Governor Dolph Briscoe as judge of the 246th District Court. There, he presided over family law cases, and helped reform the family court system through his endorsement of mediation programs within the court system in 1985. In 1990, Peavy was placed in charge of family law courts for all of Harris County. Peavy retired from his district court judgeship in 1994.

Peavy was a member of the Houston Area Urban League, the NAACP, and the U.S.-China Friendship Association. He also served as the director of the Contemporary Arts Museum in Houston, Texas. In 2018, Peavy was honored with a historic portrait at the Harris County District Civil Courthouse.

Peavy and his wife, Diane Massey, have four children.

Judge John W. Peavy, Jr. was interviewed by The HistoryMakers on December 2, 2016.

See how The Honorable John W. Peavy, Jr. is related to other HistoryMakers
Donate Now
Click Here To Explore The Archive Today!