Information about The Honorable John Lewis 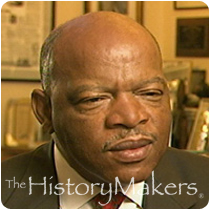 Congressman John Lewis rose from abject poverty to become one of America’s leaders. He has been at the forefront of progressive social and political causes for more than forty years. Lewis was born on February 21, 1940, in Troy, Alabama to sharecroppers Eddie Lewis and Willie Mae Miles. Growing up, Lewis and his nine siblings worked regularly on his family’s farm, frequently in lieu of attending the county’s segregated schools.

Without his family’s knowledge, Lewis became involved in the civil rights movement as a student at the American Baptist Theological Seminary in Nashville, Tennessee, where he helped form the Student Nonviolent Coordinating Committee (SNCC). In February 1960, Lewis helped spark a successful sit-in movement at segregated lunch counters in Nashville on the heels of sit-ins in Greensboro, North Carolina. In 1961, Lewis volunteered to become a member of the Freedom Riders. Lewis risked his life and was beaten several times by white mobs for his participation.

Lewis served as chairman of SNCC from 1963 to 1966. As chairman, he was recognized as one of the “Big Six” of the civil rights movement (along with Martin Luther King, Jr., A. Phillip Randolph, Whitney Young, James Farmer, and Roy Wilkins) who met with President John F. Kennedy to discuss the planning of the March on Washington. In 1963, at the age of twenty-three, he was a keynote speaker at this historic event. In 1964, under the auspices of SNCC, Lewis helped coordinate and organize the successful Mississippi Freedom Summer.

In 1965, Lewis and fellow activist Hosea Williams led “Bloody Sunday,” one of the most dramatic nonviolent protests of the movement. The publicity surrounding Bloody Sunday and the subsequent march from Selma to Montgomery, Alabama, led President Lyndon Johnson to push for the Voting Rights Act, passed by Congress on August 6, 1965.

Lewis was elected to his first governmental office in 1981, serving as an Atlanta City Council member until 1986. He then was elected to represent Georgia’s 5th Congressional District, which represents the city of Atlanta and parts of several outlying counties. His 1996 bid for reelection went unopposed, and he is currently in his ninth term in office. Lewis is a member of the House Committee on Ways and Means, the Congressional Black Caucus, and the Congressional Committee to Support Writers and Journalists. Since 1991, Lewis has served as Senior Chief Deputy Democratic Whip. Lewis co-authored Walking With The Wind: A Memoir of the Movement with Michael D’Orso in 1998. Lewis has also been awarded numerous honorary degrees and awards, including the John F. Kennedy “Profile in Courage Award” for lifetime achievement and the NAACP Spingarn Medal.

He and his wife Lillian, the Director of External Affairs for the Office of Research and Sponsored Programs at Clark Atlanta University, lived in Atlanta with their two sons.

John Lewis was interviewed by The HistoryMakers on April 25, 2001.

See how The Honorable John Lewis is related to other HistoryMakers
Donate Now
Click Here To Explore The Archive Today!