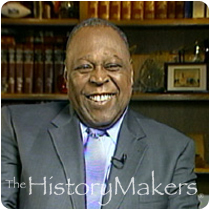 See how The Honorable John H. Stroger, Jr. is related to other HistoryMakers

John H. Stroger, Jr., the first African American president of the Cook County Board of Commissioners, was born May 19, 1929, to Ella and John Stroger, Sr. in Helena, Arkansas. Stroger attended an all black elementary school and Eliza Miller High School, earning his diploma in 1949. Stroger attended Xavier University in New Orleans, a historically black Catholic university, where his classmates included Norman Francis, Dutch Morial, and Richard Gumbel. Graduating in 1953 with his B.S. degree in business administration, Stroger taught school, coached basketball, and worked closely with the NAACP.

At his mother's urging, Stroger moved to Chicago in 1953 where he became involved in Chicago’s South Side Democratic Party. It was there that Stroger met Congressman William L. Dawson, Ralph Metcalfe, and Harold Washington. Stroger was appointed as an assistant auditor with the Municipal Court of Chicago in 1954, and served as personnel director for the Cook County Jail from 1955 to 1961. Stroger then worked for the financial director of the State of Illinois while earning a law degree from DePaul University Law School in 1965. In 1968, Stroger was elected 8th Ward Committeeman. After his election to the Cook County Board of Commissioners in 1970, Stroger went on to chair every major committee including finance, health, building and zoning. As Commissioner, Stroger sponsored legislation aimed at assisting minority and female owned businesses. He also cosponsored the county's human rights, ethics, and assault weapons ban ordinances. In 1994, Stroger became the first African American to be elected president of the Cook County Board and Forest Preserve District. As board president, Stroger balanced the county's $2.9 billion dollar budget, instituted a juvenile drug court, appointed a commission on women's issues, and opened a new AIDS treatment and research facility. Dedicated to health care, Stroger served on the Chicago Metropolitan Healthcare Council and the board of South Shore Hospital. Stroger's efforts to win approval for a new Cook County Hospital resulted in the facility being named the John H. Stroger, Jr. Cook County Hospital. Stroger was president of the National Association of Counties and was appointed by former President Bill Clinton as a member of the Advisory Committee on Intergovernmental Relations. In 2006, Stroger suffered a severe stroke and had to resign as president of the Cook County Board of Commissioners despite being re-elected earlier in the year.

A long time member of St. Felicitas Catholic Church, Stroger and his wife, Yonnie, have a son, Todd, and a daughter, Yonnie Lynn. Another of Stroger's sons, Hans Eric, passed away while in college. Stroger’s surviving son, Todd, is the president of the Cook County Board of Commissioners.

See how The Honorable John H. Stroger, Jr. is related to other HistoryMakers
Click Here To Explore The Archive Today!