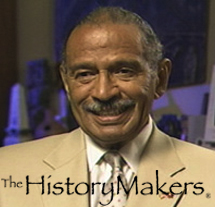 See how The Honorable John Conyers, Jr. is related to other HistoryMakers
Donate Now

Congressman John Conyers, Jr. was born in 1929, in Detroit, Michigan. After graduating from Detroit public schools, he earned his B.A. degree in 1957, and his J.D. degree in 1958, from Wayne State University. Before beginning a career as a private attorney, Conyers served one year in Korea as an officer in the U.S. Army Corps of Engineers and was awarded combat and merit citations.

In 1958, Conyers began his work in politics as an aide to Congressman John Dingell, whom he served until 1961. Conyers made history when he was elected to the House of Representatives in 1964 on a platform of jobs, justice and peace. During his years in Congress, social justice and economic opportunity have remained focal points of Conyers’ platform.

The list of Conyers’ legislative accomplishments is long and impressive. Some of the bills authored or sponsored by Conyers include the Martin Luther King Holiday Act, the Alcohol Warning Label Act, the National Voter Registration Act and the Hate Crime Statistics Act. As the first African American Democratic leader on the House Judiciary Committee, he attached crucial civil rights measures to the 1994 Omnibus Crime Bill, including the Racial Justice Act and the Police Accountability Act. Conyers generated the Justice Department’s national study on police brutality, and he conducted hearings in several cities on police violence, racially motivated violence, sentencing, white-collar crime and other criminal justice matters.

Conyers was re-elected in November 2006, to his twenty-first term in the House, presenting Michigan’s 14th Congressional District. His district includes Detroit and the Wayne County communities of Dearborn Heights, Pointe Shores, Grosse Pointe Woods, Harper Woods, Highland Park and Redford. Conyers is the longest-serving African American in the history of the House. He is the dean and a founding member of the Congressional Black Caucus. Conyers also is a jazz aficionado and is responsible for jazz’s classification as a national American treasure.

Conyers is married to the former Monica Esters. Together they have raised two sons, John III and Carl Edward.

See how The Honorable John Conyers, Jr. is related to other HistoryMakers
Donate Now
Click Here To Explore The Archive Today!