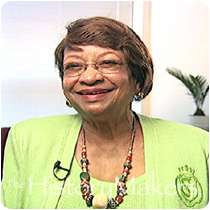 Favorite Food:
Ice Cream (Sugar-free)
Favorite Time of Year:
Spring, Fall, Winter
Favorite Vacation Spot:
Chicago, Illinois
Favorite Quote:
When The Door Of Opportunity Opens, Be Ready To Put Your Foot In, And Leave It Open For Your Brother And Sister.

Favorite Food:
Ice Cream (Sugar-free)
Favorite Time of Year:
Spring, Fall, Winter
Favorite Vacation Spot:
Chicago, Illinois
Favorite Quote:
When The Door Of Opportunity Opens, Be Ready To Put Your Foot In, And Leave It Open For Your Brother And Sister.

Academic administrator and cabinet appointee The Honorable Joan Scott Wallace was born in Chicago, Illinois on November 8, 1930. Her mother, Esther, worked as a social worker, and her father, William Edouard, was a painter during the Harlem Renaissance. Many of his works appeared as covers on the NAACP’s magazine, The Crisis. After graduating from Englewood High School in Chicago in 1948, Wallace attended Bradley University, earning a B.A. in social work. Wallace then went on to attend Columbia University, earning a master’s in social work in 1958, and later earned a Ph.D. from Northwestern University in 1973.

Beginning her career with the government during the Carter administration, Wallace was named Assistant Secretary of Agriculture in 1977. There she managed administration policy in personnel, equal opportunity and administrative law among other duties. She held that post until 1981, when she became the head of the International Cooperation and Development Agency. In that position, Wallace sent specialists to 100 foreign countries to provide technical assistance in agriculture and managed over 500 research programs. With the election of George H. W. Bush as president, Wallace was a diplomat with the rank of ambassador to Trinidad and Tobago and represented the Inter-American Institute for Cooperation on Agriculture.

Wallace retired from the government shortly after the election of President Clinton, and then became the CEO of Americans for Democracy in Africa, a non-profit organization that monitored elections in African countries. Wallace has also served as dean of the Howard University School of Social Work, the director of the Western Michigan School of Social Work and the vice president for administration at Morgan State University. She also was the first female vice president of the National Urban League under Vernon E. Jordan, Jr.

Since 2000, Wallace has been the commissioner of Volunteer Florida: the Governor’s Commission on Community Service.

See how The Honorable Joan Scott Wallace is related to other HistoryMakers
Donate Now
Click Here To Explore The Archive Today!