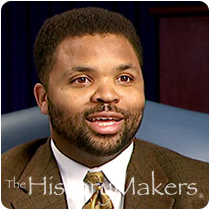 See how The Honorable Jesse Jackson, Jr. is related to other HistoryMakers
Donate Now

In 1995, he won election to the U.S. House of Representatives. Currently, Jackson sits on the House Appropriations Committee and on the subcommittees on Labor, Health and Human Services, and Education. Jackson has been awarded honorary doctorate degrees from the Chicago Theological Seminary, North Carolina A&T State University and Governors State University. Jackson was reelected in 2000, with a ninety to ten margin, and then won again in 2004. Jackson is known for his liberal agenda and his broad appeal.

Outside of his political career Jackson has coauthored numerous books including It's About the Money: How You Can Get Out of Debt, Build Wealth, and Achieve Your Financial Dreams and Legal Lynching: The Death Penalty and America’s Future. Jackson has also worked as national field director for the Rainbow Coalition.

See how The Honorable Jesse Jackson, Jr. is related to other HistoryMakers
Donate Now
Click Here To Explore The Archive Today!