Information about The Honorable Jerry Washington 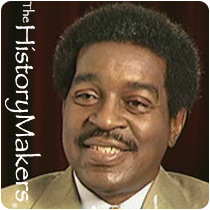 See how The Honorable Jerry Washington is related to other HistoryMakers

After marrying Ella Willoughby and starting a family, Washington was forced to hold two jobs while continuing his education. During the early 1960s, Washington became involved with the Young Republicans Organization, primarily because his father was a Republican precinct captain. He ran for elective office in 1972, but was unsuccessful. Meanwhile, he worked as a marketing group consultant for Blue Cross Blue Shield Insurance. In 1984, Washington was elected to represent the 24th District in the Illinois General Assembly. In that role, Washington served as a member of the House Committees on Appropriation, Election, Revenue and others. He was also a member of the 84th General Assembly Special Education Task Force. During his term in office, Washington was the recipient of several awards and commendations.

Washington was one of the few Republicans in the Legislative Black Caucus, often working with and supporting his black Democratic counterparts. For instance, his cooperative efforts with Democratic Senator Howard Brookins resulted in the expansion of the DuSable Museum of African American History. Washington’s final act in the state legislature was to work for passage of a joint House/Senate resolution that created housing for retired Illinois veterans.

Several other challenges plagued Washington during and after his tenure in office. In 1987, he suffered a brain aneurysm while driving, luckily recovering after being in a coma for two weeks. Ten years later, a brain tumor was operated on, but was found to be benign. Washington has also suffered from diabetes for most of his life.

Washington and his wife, Ella, have seven children and ten grandchildren. An outspoken advocate for educational reform, Washington has served as a consultant for 21st Century V.O.T.E. and currently serves as a member of the Englewood Local School Council.

Washington was interviewed by The HistoryMakers on August 9, 2000.

See how The Honorable Jerry Washington is related to other HistoryMakers
Click Here To Explore The Archive Today!