Information about The Honorable Jennifer Jones 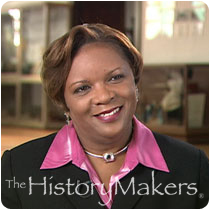 See how The Honorable Jennifer Jones is related to other HistoryMakers

Judge Jennifer Lynn Jones holds the distinction of being the first African American woman to serve as a judge in the State of Kansas. Born in Wichita Kansas on September 25, 1960 to Nannie Hatch and Leamon Jones, both Oklahoma natives, Jennifer was the fifth of seven children. She attended Wichita's Southeast High School where she graduated in 1978.

After high school, Jones enrolled at Emporia State University and then transferred to the University of Missouri at Columbia where, in 1982, she received her bachelor's degree in Social Work. Determined to continue her education, Jones was accepted to the University of Oklahoma Law School. While there, she was a member of many clubs and societies and served as President of the Black Law Students Association. Jones received her J.D. degree in May, 1985. Following law school, Jones began her career in the office of the District Attorney of Muskogee, Oklahoma. While working for the District Attorney, she developed a specialty in prosecuting sex offenses, child abuse and juvenile cases. In May 1988, she returned to Wichita for a position with the law firm of Bruce and Davis. She became a partner at the firm in 1992. That same year, Jones ran for and was elected Sedgwick County District Court Judge, making her the first African American woman to hold the position of judge in the State of Kansas.

In January of 2001, Judge Jones was appointed to the Municipal Court for the City of Wichita, Kansas. Although the duties of this position demand a lot of her time and energy, she strives to remain active in her community, church and the lives of her two children. Judge Jones also has the honor of being selected by the Kansas Supreme Court to serve as a member of the Commission on Judicial Qualifications. The commission reviews ethical violations of judges throughout the State of Kansas.

Jennifer Jones was interviewed by The HistoryMakers on August 29, 2002.

See how The Honorable Jennifer Jones is related to other HistoryMakers
Click Here To Explore The Archive Today!