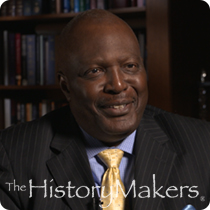 See how The Honorable James R. Spencer is related to other HistoryMakers

Spencer’s interest in law began in 1967, while working under civil rights activist Marian Wright Edelman at her public interest law firm, the Washington Research Project. Upon graduating from Harvard Law School, he worked as a staff attorney with the Atlanta Legal Aid Society. He went on to serve as a prosecutor, and then as chief of justice, with the U.S. Army Judge Advocate General’s Corps from 1975 to 1978. From there, Spencer became an assistant attorney general, serving the U.S. Attorney’s Office of District of Columbia. He was the first African American attorney assigned to the office’s Major Crimes Division. In 1983, he moved to the U.S. Attorney’s Office of the Eastern District of Virginia, where he remained until 1986 when he was appointed by President Ronald Reagan as the first African American district court judge of the U.S. District Court for the Eastern District of Virginia. From 1987 to 1996, Spencer also served as an adjunct professor of law at the University of Virginia. In 2004, Spencer was appointed as chief justice of the district, serving until 2011. In 2014, Spencer assumed the rank of senior judge. He presided over a number of high-profile cases over the course of his career, including the 2006 patent infringement suit between Research In Motion, the maker of BlackBerry devices, and the patent holding company NTP, Inc.; and the 2014 corruption trial of Virginia Governor Bob McDonnell.

Spencer was a member of numerous professional, civic and fraternal organizations, including the State Bar of Georgia, the District of Columbia Bar, the Virginia State Bar, the National Bar Association, the Old Dominion Bar Association, and the Federal Bar Association, Big Brothers of America, the NAACP, Omega Psi Phi Fraternity, Alpha Kappa Mu, Sigma Pi Phi, and Phi Beta Kappa. Spencer also earned a black belt and was a member of the U.S. Karate Association. He served as associate pastor of the 3rd Union Baptist Church in King William, Virginia.

Judge James R. Spencer was interviewed by The HistoryMakers on December 8, 2016.

See how The Honorable James R. Spencer is related to other HistoryMakers
Click Here To Explore The Archive Today!