Information about The Honorable James Ford 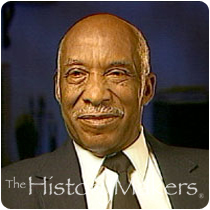 See how The Honorable James Ford is related to other HistoryMakers

James R. Ford, accomplished educator, politician, businessman, and community activist, was born on December 1, 1925 in Leon County, Florida. He attended Florida A&M University, where he earned his B.S. in 1950 and his M.Ed. in 1959.

In 1972, Ford became Tallahassee's first black mayor, the first black mayor of a state capitol city. He served subsequent terms as mayor in 1976 and 1982. In addition, he served fourteen consecutive years as a Tallahassee City Commissioner. In this office, he played a key role in establishing the Minority Business Department, the Frenchtown Area Development Authority and the Affirmative Action Office and worked to eliminate segregated practices in the city government and to secure employment for blacks.

Ford is also active in the business community. He built WAMN Radio Station, becoming Tallahassee's first black manager of a radio station. He owns and manages six businesses and acts as the President of CNJ Associates, Inc. He has served as the president of Sigma Phi Pi and Alpha Phi Alpha fraternities; the Tallahassee Urban League; the Tallahassee Chapter of 100 Black Men; and as Commander of the Tallahassee Sail and Power Squadron. He has sat on the boards of the Chamber of Commerce, the United Way, Meals on Wheels, the March of Dimes Big Bend Chapter, the American Red Cross's Tallahassee Chapter and the Florida League of Cities; he currently sits on the boards of the Tallahassee Memorial Regional Medical Center, the Lively Vocational School and Peoples 1st Community Bank. He and his wife Clinita have a son and two daughters.

See how The Honorable James Ford is related to other HistoryMakers
Click Here To Explore The Archive Today!