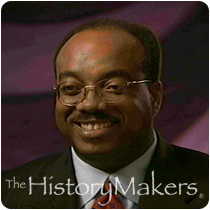 See how The Honorable James Clayborne, Jr. is related to other HistoryMakers
Donate Now

James Franklin Clayborne, Jr., was born in St. Louis, Missouri on December 29, 1963, to James and Janet Clayborne. He attended Paul Lawrence Dunbar Elementary School, Lansdowne Junior High School and East St. Louis High School, where he played football. After graduation, Clayborne enrolled at Tennessee State University before attending the University of Miami Law School. While at the University of Miami, he served as a law clerk for the United States District Court for the Southern District of Florida. There, he interned with Janet Reno, then Dade County States Attorney and future U.S. Attornery General. While residing in Florida, he met and married his wife, Staci.

Clayborne returned to Belleville, Illinois where he found employment in the States Attorney’s Office. Two years later, he joined the law firm of Hinshaw and Culbertson. When Illinois Senator Kenneth Hall died in 1995, Clayborne was appointed to complete Hall’s unexpired term. The following year, Clayborne was elected to the Illinois Senate where he currently serves. Clayborne sits on the Committees of Appropriations, Commerce & Industry and Revenue, for which he is the Minority Spokesperson. A finalist for U.S. District Attorney for the Southern District of Illinois, Clayborne was one of fifty attorneys selected nationwide to participate in the Federal Bureau of Investigation’s National Law Institute.

In 1997, Clayborne received the “Friend of Education” Award from the Illinois Association of Regional Superintendents of Schools, for his “outstanding commitment to education.” In addition, he spearheaded a resolution to name a state office building in East St. Louis after his predecessor in the Senate, Kenneth Hall. A member of Kappa Alpha Psi Fraternity and Wesley Bethel Methodist Church, Clayborne and his wife are the parents of four children.

See how The Honorable James Clayborne, Jr. is related to other HistoryMakers
Donate Now
Click Here To Explore The Archive Today!