Information about The Honorable Ivan Lemelle 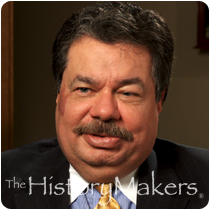 See how The Honorable Ivan Lemelle is related to other HistoryMakers

In addition to service in leadership positions with numerous civic, fraternal and professional organizations, Judge Lemelle has also served on the Federal Judicial Center’s Advisory Committee for the Guide to Judicial Management of Cases in Alternate Dispute Resolution, President of the Loyola College of Law-Thomas More Inn of Court, Visiting Committee Board for Loyola College of Law, Amistad Research Center’s Executive Board, Federal Bar Association New Orleans Chapter Board of Directors, District Judges Association for the U. S. Fifth Circuit Executive Committee, and the Board of Reconcile New Orleans, Inc.-a nonprofit committed to addressing the system of generational poverty, violence and neglect in the New Orleans area.

Judge Ivan Lemelle was interviewed by The HistoryMakers on June 8, 2010.

See how The Honorable Ivan Lemelle is related to other HistoryMakers
Click Here To Explore The Archive Today!