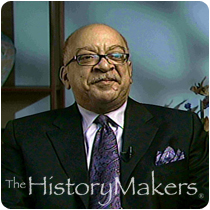 See how The Honorable Hugh Barrington Clarke, Jr. is related to other HistoryMakers

Judge Hugh Barrington Clarke, Jr. was born on July 14, 1954, in Detroit, Michigan, to Gwendolyn and Hugh Barrington Clarke, Sr. As a young boy, Clarke enjoyed playing baseball and was influenced by Detroit’s “Motown Sound,” often performing in his school’s talent shows. He attended Pattengill Elementary School and Dixon Elementary School before attending Webber Junior High School as an adolescent. In 1967, during a time of great social and political upheaval, Clarke witnessed the Detroit Riots from his front porch. He went on to graduate at the age of sixteen from Cass Technical High School.

In 1971, Clarke enrolled at Oakland Community College. Afterwards, he pursued his B.S. degree in criminal justice at Wayne State University. Clarke followed his career path by attending the Detroit City Police Academy. However, in 1976, due to a lack of city funding, he accepted a managing position at a women’s clothing store before enrolling at Thomas M. Cooley Law School. While in law school, Clarke worked on the drafting of the Revised Michigan Probate Code and various amendments to the Michigan Code of Criminal Procedure. He graduated in 1979 with his J.D. degree and went on to work for the Associate General Counsel for the State Senate. Then, in 1981, Clarke went to work at the law firm of Rosenbaum and Holland. The firm later added another attorney and changed its name to Rosenbaum, Holland, Clarke and Foster. In 1989, Clarke founded Hugh Clarke and Associates and began working on high profile criminal cases including providing legal services for rapper Tupac Shakur and NFL football player Muhsin Muhammad.

In 2000, Clarke married former Olympic track and field silver medalist, Judith Brown. The married couple went on to have a baby boy, Hugh Barrington Clarke, IV. Clarke became a member of the Lansing Board of Education in 2003 and served as its president in 2007. During that time, he served as chair of the superintendent search committee and chair of the personnel search. In 2010, Clarke was appointed as a judge on the 54-A District Court in Lansing, Michigan.

See how The Honorable Hugh Barrington Clarke, Jr. is related to other HistoryMakers
Click Here To Explore The Archive Today!