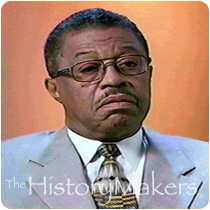 See how The Honorable Howard Brookins, Sr. is related to other HistoryMakers

Howard Beamon Brookins was born on June 6, 1932 in Chicago, Illinois. The son of Howard and Leona Brookins, he attended DuSable High School and Wilson Junior College (now Kennedy-King) before being drafted into the United States Army. Serving during the Korean War, Brookins had an opportunity to become an officer, but changed his mind when the fighting ceased. Brookins returned to Chicago to resume his education, attending Chicago State University and Cortez Peters Business College. He supported himself by working at the U.S. Post Office. In 1958, one of Brookins’ co-workers suggested that he take the Chicago Police Exam. He passed and joined the Chicago Police Department. The same year, he also married Audrey Mason, his wife for over forty years.

Brookins remained on the police force for twelve years. During this time, the Reverend Louis Rawls offered him a job as a funeral driver. Rawls later suggested that Brookins start his own business as a mortician. Brookins enrolled at the Worsham College of Mortuary Science while still on the police force. In 1970, Brookins bought a funeral home on the South Side of Chicago.

After endorsing and supporting candidates such as Niles Sherman and Gus Savage, Brookins decided to run for office himself. In 1982, he ran for a seat in the Illinois House of Representatives and won, serving there through 1986. He then decided to run for the Illinois Senate and, once again, he was successful. While in office, Brookins was Chairman of the Transportation Committee. He also served on the Veteran’s Affairs, Appropriations and Labor Committees. One of his achievements was the passage of a bill to allow voters to register anywhere in the State of Illinois. This resulted in the registration of a record number of African Americans in Illinois.

Since leaving the Illinois General Assembly in 1992, Brookins has remained active as the owner of the Brookins Funeral Home. He and his wife are the parents of three children, Howard Jr., Andrea and Rhonda. He is affiliated with several organizations and serves on the boards of the DuSable Museum of African American History, the Illinois Department of Corrections and Little Company of Mary Hospital. He is also a Mason.

Brookins was interviewed by The HistoryMakers on July 7, 2000.

See how The Honorable Howard Brookins, Sr. is related to other HistoryMakers
Click Here To Explore The Archive Today!