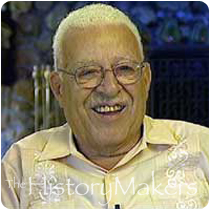 See how The Honorable Herbert Tucker, Jr. is related to other HistoryMakers

Upon completing his law degree, Tucker was hired by the Internal Revenue Service as a revenue agent in 1943. Tucker remained with the IRS until 1952, when he established a private practice, Cardozo & Tucker. In 1959, Tucker was named assistant attorney general of the state of Massachusetts, where he remained for nine years. At the time, he also served as president of the Boston chapter of the NAACP. In his dual capacities, Tucker sought a probe of the Boston Red Sox as a result of their releasing their only African American player in what Tucker described as an ongoing pattern of discrimination.

In 1960, Tucker was appointed by Senator John F. Kennedy to the civil rights section of his 1960 presidential campaign. In 1969, Tucker became commissioner of the Massachusetts Department of Public Utilities and was named chairman in 1972. The following year, Tucker was named special justice to the Municipal Court of Dorchester, and in 1974 he became the presiding justice of the district. Leaving Dorchester, Tucker became the presiding judge of the Edgartown District Court in 1979, where he remained until his retirement in 1985. For much of his career, Tucker was also a lecturer at several universities, including Boston College, Boston University, Northeastern University and Harvard College.

Tucker has been involved with a number of organizations over the years, including serving as the grand basileus of Omega Psi Phi Fraternity from 1955 to 1958. He currently serves as a trustee of the fraternity, a position he has held since 1969. He has also served as the chairman of the executive committee of Simmons College since that year. His alma mater, Northeastern University, named him the alumnus of the year in 1971. Tucker and his wife, Mary, have two children. Tucker passed away on March 1, 2007.

See how The Honorable Herbert Tucker, Jr. is related to other HistoryMakers
Click Here To Explore The Archive Today!