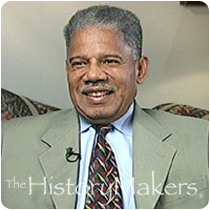 See how The Honorable Henry L. Marsh, III is related to other HistoryMakers

Civil rights attorney Henry L. Marsh III was born December 10, 1933, in Richmond, Virginia. He attended Moonfield and George Mason Elementary Schools and graduated with honors from Maggie L. Walker High School in 1952. Earning a B.A. in sociology from Virginia Union University in 1956, he went on to obtain an L.L.B. from Howard University Law School in 1959.

Marsh joined with Samuel L. Tucker to form the law firm of Tucker & Marsh in 1961. They were joined by Oliver Hill in 1965 to form Hill, Tucker & Marsh. He immediately joined the fight against the “massive resistance” that was Virginia’s announced policy toward the de-segregation actions called for in the Brown v. The Board of Education decision of 1954. His counsel in Gravely v. Robb resulted in single member districts for the General Assembly of Virginia. After having served on the Richmond City Council since 1966, Marsh won the mayor’s seat in 1977, the first black mayor in the city’s history. In 1981, he hosted the National Conference on the Black Agenda, which attracted 1,500 African American state, local and federal officials. In 1991, Marsh was elected Senator from the 16th Senate District, now serving his third term.

Marsh is co-founder of the Richmond Renaissance and the Metropolitan Economic Development Council, and a past president of the National Black Caucus of Elected Officials and a member of the board of directors of the National League of Cities. Marsh has also recently formed the Support Committee for Excellence in the Public Schools. In addition, he established the New Millenium Leadership Institute, is founder of the Unity Day Celebration Committee, and hosts Richmond’s Annual Juneteenth Celebration. He also has served as chairman of the Martin Luther King, Jr. Memorial Commission.

The recipient of numerous awards, Marsh lives in Richmond with his wife, Diane. He has three children, four grandsons and two granddaughters.

See how The Honorable Henry L. Marsh, III is related to other HistoryMakers
Click Here To Explore The Archive Today!