Information about The Honorable Harry Elam 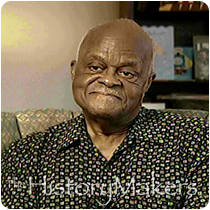 Retired Judge Harry Justin Elam was the first African American appointed to the Boston Municipal Court of Massachusetts. Subsequently, Elam became the Chief Justice of this court and later was appointed as an Associate Justice of the Massachusetts Superior Court. Prior to his judgeship years, between 1971 and 1988, he was a prominent lawyer in the city of Boston from 1952 to 1971.

Elam was born on April 29, 1922 in Boston, Massachusetts, the second child of five born to Robert H. and Blanche Lee Elam. A graduate of Boston Latin School, he attended Virginia State College between 1940 and 1942. He served in the U.S. Army during World War II from 1942 to 1946 and earned an A.B. degree from Boston University in 1948 and his J.D. degree from Boston University’s Law School in 1951. In his early years of general law practice, Elam partnered with Edward W. Brooke, who went on to become a U.S. senator from Massachusetts, the first since Reconstruction.

As a judge in both the municipal and state courts, Harry Elam maintained a deep and sensitive connection to Boston’s neighborhoods. He saw the reduction of adult and juvenile crime as a responsibility of those leading the court system and so he linked himself and fellow jurists with social, cultural, and political issues in his community. Elam was the founder and first president of the Massachusetts Black Judges Conference. He was the founder and first president of the Roxbury Multi-Service Center, serving twelve years as the Center’s president. Elam also chaired the board of directors of the Elma Lewis School of Fine Arts for ten years.

Elam’s signature community project was Project Commitment. He served as its creator and chair for twelve years. This project brought Black judges and lawyers into public school classrooms to mentor youth. His most coveted recognition is one received in 1983, the Martin Luther King, Jr. Drum Major for Justice Award presented jointly by two of Boston’s venerable Black Episcopal churches.

Elam retired to Buzzards Bay on Cape Cod in Massachusetts with his wife, Barbara, have four children, Patricia, Harry, Jr., Keith, and Jocelyn.

See how The Honorable Harry Elam is related to other HistoryMakers
Donate Now
Click Here To Explore The Archive Today!