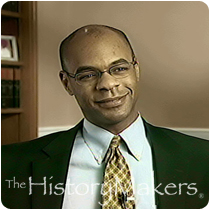 See how The Honorable Harold D. Melton is related to other HistoryMakers

Georgia Supreme Court Justice Harold David Melton is the son of Carole H. Melton of Atlanta, Georgia. His father and role model, Augustus A. Melton, Jr. of Washington, D.C. is the first Black person and one of two to manage the District of Columbia’s National Airport (now Reagan International Airport).

Melton was born in Washington, D.C. on September 25, 1966. He was the younger of two boys. He grew up in the East Pointe and Marietta sections of Atlanta. In 1985, Melton attended Auburn University in Auburn, Alabama where he majored in international business and Spanish. During his second year at Auburn, he financed his tour of Peru, Bolivia and Brazil as a basketball player and Spanish interpreter for the school’s basketball team. Melton was the first person of color elected to serve as president of the student senate at Auburn and was the second to run and win as an independent. In 1991, he earned his J.D. degree from Georgia State University in Athens, Georgia. Following graduation from law school, he accepted a position in the office of Alabama Governor Guy Hunt as Assistant Attorney General in the Fiscal Affairs Division. He was promoted to Senior Assistant Attorney General in 1997 and Section Leader in the Tax Division. In 1998, he was selected to serve as Assistant to the Governor for Youth Affairs.

From 1998 to 2003, Melton supervised an administrative staff and six lawyers in the Consumer Interests Section as Leader in the Georgia Department of Law in Atlanta. In January 2003, Melton was appointed Executive Counsel to the Honorable Sonny Perdue to represent the Governor on legal issues. At thirty-eight years of age on July 1, 2005, he was appointed to the Supreme Court of Georgia.

Melton is an active board member of Atlanta Youth Academies and serves as Youth Leader for Southwest Christian Fellowship Church. From 1991 to 2002, he was a Volunteer Leader for Young Life Ministries.

Melton resides in Atlanta with his wife, Kimberly and their three children.

See how The Honorable Harold D. Melton is related to other HistoryMakers
Click Here To Explore The Archive Today!