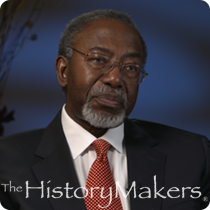 See how The Honorable H. Ron White is related to other HistoryMakers
Donate Now

Judge and lawyer H. Ron White was born on February 10, 1941 in Richmond, Virginia to Ernest White and Mattie White. He graduated from Maggie L. Walter High School in 1958. White received his B.S. degree in biology and chemistry from Hampton University in 1962, and his J.D. degree from Howard University in 1971.

After graduation from Hampton University, White joined the U.S. Army in 1962. He was stationed in Kaiserslautern and Mannheim, Germany, and at Fort Jackson, South Carolina. From 1967 until 1968, White served a tour of duty in Vietnam, and was stationed in Quin Yan. By the end of his military service, he had reached the rank of captain. White began his professional career in 1971 at the Atlantic Richfield Oil Company as an environmental and labor attorney. He was promoted to the position of federal regulatory compliance counsel in 1974. Two years later, White joined Irvin & White, P.C., which became White, Mahomes, and Briscoe, P.C. the following year. In 1979, White established the Law Offices of H. Ron White & Associates. He then served as a district court judge in the State of Texas after being appointed to the position in 1983. White returned to his private law practice in 1985, and served as a partner at White & Wiggins.

In addition to his law practice, White has been active in a number of organizations. Specifically, he has been a board member of The General Counsel Forum for the Dallas and Fort Worth Chapter, and the Urban League of Greater Dallas and North Texas. White has also been a member of the Texas Bar College and the National Bar Association, as well as a Life Fellow of Texas Bar Foundation.

White has been recognized and awarded for his contributions to the community. In 2004, White was named as “Trial Lawyer of the Year” by the Dallas Bar. He also received the Dallas Bar Foundation Fellows Award for Outstanding Service to the Bar and Civic Community in 2006. White was named as one of the fifty “Lions of the Texas Bar” by The Texas Lawbook, as well as a Texas Super Lawyer by Martindale-Hubbell in 2005 and from 2010 through 2015.

White and his wife, Rita C. White, have one son, Eric.

H. Ron White was interviewed by The HistoryMakers on March 14, 2017.

See how The Honorable H. Ron White is related to other HistoryMakers
Donate Now
Click Here To Explore The Archive Today!