Information about The Honorable Gus Savage 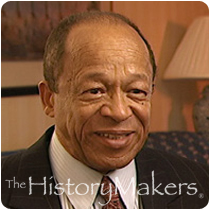 See how The Honorable Gus Savage is related to other HistoryMakers

Born October 30, 1925 in Detroit, Michigan, Gus Savage and his family moved to the South Side of Chicago five years later. Savage recalls a childhood spent in abject poverty and cramped quarters in a Chicago neighborhood that was a chief battleground in the city's racial turf wars. In this environment he was lured by gangs, violence, and gambling. After high school he entered the U.S. Army and was sent to the South for training, and it was in the South that Savage experienced first hand virulent anti-black racism. His experiences there led him away from his past gang activity and towards a renewed Christian faith, activity in the Civil Rights Movement and a burgeoning intellectual curiosity.

Savage was honorably discharged from the service and returned to Chicago, where, in 1950, he enrolled in Roosevelt University. Three years later, he graduated with a B.A. in philosophy. After graduating, he went on to Chicago-Kent College of Law, and began to involve himself politically. He worked on Henry Wallace's 1948 Progressive Party campaign for the Presidency and picketed city hall for housing opportunities for blacks.

From 1965 to 1980, Gus Savage was one of Chicago's most influential black journalists, as the owner of the Citizen newspapers, a chain of community weeklies in the Chicago area. During this time, he became a forceful voice for equality and black liberation, leading campaigns against the Chicago political machine for equal housing access and civil rights. In 1977, he managed Harold Washington's first unsuccessful bid for mayor and many credit him for paving the way for Washington's successful bid, six years later.

Having routinely run unsuccessfully in local and congressional elections, Savage's 1980 campaign for Congress was generally viewed as a long shot. Savage stunned the political establishment in both the Democratic primary and the general election and was elected to the U.S. House Representatives from Illinois' Second District. During his decade in Congress, Savage continued to be a strong voice for equality and minority advancement, serving as Chairman of the House Subcommittee on Economic Development and Chairman of the Minority Business Braintrust of the Congressional Black Caucus. He also served on the House Committee on Small Business and on Public Works and Transportation, and was able to bring a $153 million to Chicago.

See how The Honorable Gus Savage is related to other HistoryMakers
Click Here To Explore The Archive Today!