Information about The Honorable Gregory Mathis 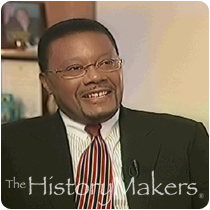 See how The Honorable Gregory Mathis is related to other HistoryMakers

Judge Greg Mathis, the youngest elected judge in Michigan’s history, was born on April 5, 1960, in Detroit, Michigan. Raised by his mother, Mathis’s troubled upbringing and membership in the Errol Flynns gang is documented in his 2002 autobiography Inner City Miracle. After attending Herman Gardens Elementary School, Peterson Seventh Day Adventist School, and Wayne Memorial High School, Mathis earned his GED through Operation PUSH while on juvenile probation in 1977. Mathis received his B.S. degree in public administration from Eastern Michigan University in 1982 and his J.D. degree from the University of Detroit Law School in 1987. Mathis led the Free South Africa and voter registration campaigns at Eastern Michigan University.

In 1983 Mathis joined the staff of Detroit City Councilman Clyde Cleveland, volunteered for Operation Push, and worked on Reverend Jesse Jackson’s presidential campaign in 1984. In 1986, Mathis, his wife Linda, and some friends formed Young Adults Asserting Themselves (YAAT) and four preschools in Detroit. Chosen to head Reverend Jackson’s 1988 presidential campaign in Michigan, Mathis later worked as the manager of Detroit’s Neighborhood City Halls for the late Mayor Coleman A. Young. In 1995, Mathis was elected to Michigan’s 36 District Court, and in 1998 Warner Brothers Television launched the Judge Mathis Show.

Featured prominently in both the print and electronic media, Mathis has been the recipient of many awards and honors. A chairman of Rainbow/PUSH-Excel board, a lifetime member of the NAACP, and a member the Southern Christian Leadership Conference board, Mathis and his wife and college sweetheart, Linda, have raised four children.

See how The Honorable Gregory Mathis is related to other HistoryMakers
Click Here To Explore The Archive Today!