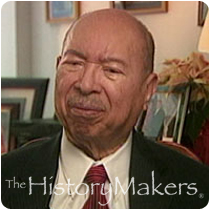 See how The Honorable Glenn T. Johnson is related to other HistoryMakers

Illinois Appellate Court Judge Glenn T. Johnson was born on July 19, 1917, in Washington, Arkansas, to Reola Thompson and Floyd Johnson. He earned his B.S. in education from Wilberforce University in Xenia, Ohio, and his J.D. and S.J.D. from John Marshall Law School in Chicago. During World War II, Johnson served in the U.S. Army. He later served as a member of the Illinois National Guard and the U.S. Army Reserve.

Johnson worked as assistant attorney general of Illinois for seven years and as a senior attorney for the Metropolitan Sanitary District of Greater Chicago for three years. In 1966, he was elected associate judge of the Circuit Court of Cook County and in 1968 was elected full Circuit Court judge, a position he held until 1973. That year, Johnson was sworn in as justice of the Appellate Court of Illinois. He served in this capacity until his retirement in 1994.

Johnson is a member of the National, American, Illinois, Cook County, Chicago and Women's Bar associations. He is past president of the Cook County Bar Association and past chairman of the Judicial Council of the National Bar Association and the Bench and Bar Section of the Illinois Bar Association. He holds memberships in various organizations and boards and is an active member of Woodlawn A.M.E. Church, where he serves as trustee emeritus and was a member of the Judicial Council for twenty-four years. Johnson is also an emeritus member of the Board of Trustees of the John Marshall Law School, where he served as a trustee for twenty-five years. He has received various awards and honors for his dedication and hard work.

Johnson was married to the late Judge Evelyn F. Johnson, with whom he had two children, Evelyn and Glenn Jr. He later married Elaine Bailey Johnson and has three grandchildren and one great-grandson. He died on November 30, 2010.

See how The Honorable Glenn T. Johnson is related to other HistoryMakers
Click Here To Explore The Archive Today!