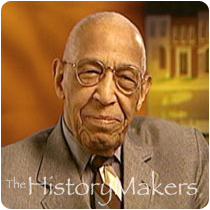 See how The Honorable George N. Leighton is related to other HistoryMakers

Drafted into military service in 1940, Leighton became a Captain of Infantry before being relieved of active duty in 1945. He returned to his Harvard education, earned an L.L.B. in 1946, and passed the Illinois bar exam the following year. Leighton served as a member and chairman of the Legal Redress Committee of the Chicago NAACP. Between 1947 and 1952, Leighton also served as president of the Third Ward Regular Democratic Organization. Appointed Assistant Attorney General of Illinois in 1949, Leighton served two years in this post. In 1951, he co-founded one of the largest predominately African American law firms in the country and the next year, he served as Chicago Branch NAACP president. Leighton was elected a Cook County Circuit Court judge in 1964 and began teaching at the John Marshall Law School the next year. In 1969, Leighton was assigned to sit as a judge on the U.S. Court of Appeals in Illinois' First District. After six years, President Gerald Ford nominated Leighton to serve as a U.S. District Court judge. He was confirmed February 2, 1976 and began serving office one month later.

Leighton retired from the U.S. District Court at the age of 75 but began serving of counsel to Earl L. Neal & Associates. Leighton has played a leadership role in governmental groups, serving as chairman of the Character and Fitness Committee for the First Appellate District of Illinois and chairman of the Illinois Advisory Committee for the U.S. Commission on Civil Rights. Leighton has also participated in civic groups, serving on the board of directors of the United Church of Christ and Grant Hospital. He and his late wife, Virginia Berry Quivers, have two adult daughters: Virginia Anne and Barbara Elaine.

See how The Honorable George N. Leighton is related to other HistoryMakers
Click Here To Explore The Archive Today!