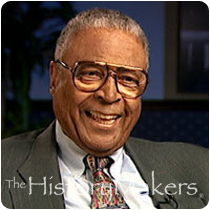 See how The Honorable George L. Brown is related to other HistoryMakers
Donate Now

The Honorable George Leslie Brown was born on July 1, 1926, in Lawrence, Kansas. Growing up on a farm in Kansas, Brown was a star athlete in basketball, football and track before graduating from Lawrence Liberty Memorial High School in 1944. During World War II, he served as a Tuskegee Airman.

In 1955, Brown made history when he was elected to the Colorado House of Representatives. He served as a state senator for eighteen years, and was reelected to five consecutive four-year terms. Then, in 1974, in the middle of his fifth Senate term, he was elected lieutenant governor, a position he held for four years. He was the nation’s first Black lieutenant governor.

In 1979, Brown joined the Grumman Corporation as vice president for marketing and was later promoted to senior vice president in charge of the firm’s regional offices, becoming the first African American corporate officer in a major U.S. aerospace company. He completed Harvard Business School’s Advanced Management Program in 1980 and worked as Grumman’s chief lobbyist in Washington, D.C., until he left Grunman in 1990. That year, Brown joined the Washington, D.C. law firm of Whitten & Diamond. In March 1994, he was named director for Prudential Securities and managed its Washington public finance office. He was a banker for Greenwich Partners from 1997 to 2000.

Brown was active on various boards and serves as a consultant and adviser for various organizations and companies. He received numerous awards and honors for his work. Brown was married to Modeen Brown. They had four daughters: Gail, Cindy, Kim and Laura.

See how The Honorable George L. Brown is related to other HistoryMakers
Donate Now
Click Here To Explore The Archive Today!